Here is What Hedge Funds Are Thinking About Merck & Co., Inc. (MRK)

Is Merck & Co., Inc. (NYSE:MRK) a buy, sell, or hold? Prominent investors are in a bullish mood. The number of long hedge fund positions improved by 4 in recent months. Our calculations also showed that MRK isn’t among the 30 most popular stocks among hedge funds.

Today there are a lot of formulas shareholders use to appraise publicly traded companies. A pair of the most underrated formulas are hedge fund and insider trading moves. Our experts have shown that, historically, those who follow the top picks of the best fund managers can outpace the S&P 500 by a solid margin (see the details here). 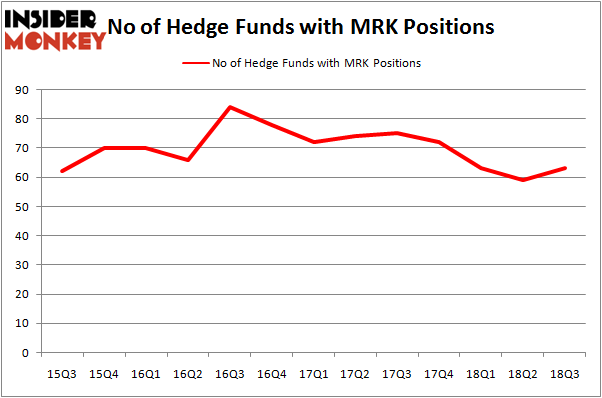 Among these funds, Fisher Asset Management held the most valuable stake in Merck & Co., Inc. (NYSE:MRK), which was worth $570.8 million at the end of the third quarter. On the second spot was Adage Capital Management which amassed $462 million worth of shares. Moreover, D E Shaw, AQR Capital Management, and Citadel Investment Group were also bullish on Merck & Co., Inc. (NYSE:MRK), allocating a large percentage of their portfolios to this stock.

As you can see these stocks had an average of 30.5 hedge funds with bullish positions and the average amount invested in these stocks was $3081 million. That figure was $5216 million in MRK’s case. Citigroup Inc. (NYSE:C) is the most popular stock in this table. On the other hand HSBC Holdings plc (NYSE:HSBC) is the least popular one with only 6 bullish hedge fund positions. Merck & Co., Inc. (NYSE:MRK) is not the most popular stock in this group but hedge fund interest is still above average. This is a slightly positive signal but we’d rather spend our time researching stocks that hedge funds are piling on. In this regard C might be a better candidate to consider a long position.