There are several ways to beat the market, and investing in small cap stocks has historically been one of them. We like to improve the odds of beating the market further by examining what famous hedge fund operators such as Carl Icahn and George Soros think. Those hedge fund operators make billions of dollars each year by hiring the best and the brightest to do research on stocks, including small cap stocks that big brokerage houses simply don’t cover. Because of Carl Icahn and other elite funds’ exemplary historical records, we pay attention to their small cap picks. In this article, we use hedge fund filing data to analyze KMG Chemicals, Inc. (NYSE:KMG).

KMG Chemicals, Inc. (NYSE:KMG) investors should pay attention to an increase in activity from the world’s largest hedge funds in recent months. Our calculations also showed that KMG isn’t among the 30 most popular stocks among hedge funds. 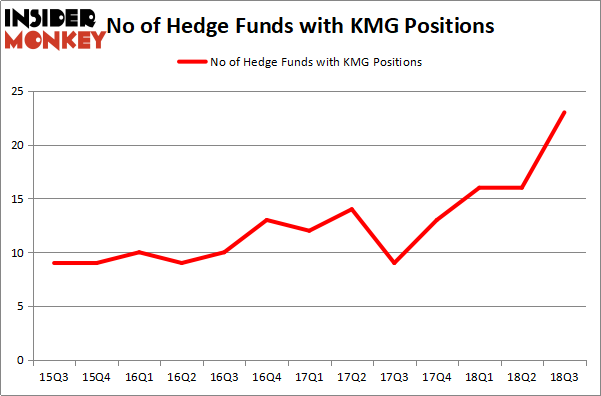 According to Insider Monkey’s hedge fund database, Renaissance Technologies, managed by Jim Simons, holds the largest position in KMG Chemicals, Inc. (NYSE:KMG). Renaissance Technologies has a $46 million position in the stock, comprising less than 0.1%% of its 13F portfolio. The second most bullish fund manager is Glazer Capital, led by Paul Glazer, holding a $26.1 million position; the fund has 2.7% of its 13F portfolio invested in the stock. Other members of the smart money with similar optimism include Paul Tudor Jones’s Tudor Investment Corp, John Orrico’s Water Island Capital and Clint Carlson’s Carlson Capital.

Let’s check out hedge fund activity in other stocks – not necessarily in the same industry as KMG Chemicals, Inc. (NYSE:KMG) but similarly valued. These stocks are Rambus Inc. (NASDAQ:RMBS), Resolute Forest Products Inc (NYSE:RFP), Retrophin Inc (NASDAQ:RTRX), and TriCo Bancshares (NASDAQ:TCBK). All of these stocks’ market caps are similar to KMG’s market cap.

As you can see these stocks had an average of 16.5 hedge funds with bullish positions and the average amount invested in these stocks was $282 million. That figure was $199 million in KMG’s case. Resolute Forest Products Inc (NYSE:RFP) is the most popular stock in this table. On the other hand Rambus Inc. (NASDAQ:RMBS) is the least popular one with only 11 bullish hedge fund positions. Compared to these stocks KMG Chemicals, Inc. (NYSE:KMG) is more popular among hedge funds. Considering that hedge funds are fond of this stock in relation to its market cap peers, it may be a good idea to analyze it in detail and potentially include it in your portfolio.