Hedge Funds and other institutional investors have just completed filing their 13Fs with the Securities and Exchange Commission, revealing their equity portfolios as of the end of September. At Insider Monkey, we follow over 700 of the best-performing investors and by analyzing their 13F filings, we can determine the stocks that they are collectively bullish on. One of their picks is Intersect ENT Inc (NASDAQ:XENT), so let’s take a closer look at the sentiment that surrounds it in the current quarter.

Is Intersect ENT Inc (NASDAQ:XENT) worth your attention right now? Investors who are in the know are betting on the stock. The number of bullish hedge fund bets moved up by 1 in recent months. Our calculations also showed that XENT isn’t among the 30 most popular stocks among hedge funds.

How have hedgies been trading Intersect ENT Inc (NASDAQ:XENT)?

Heading into the fourth quarter of 2018, a total of 22 of the hedge funds tracked by Insider Monkey held long positions in this stock, a change of 5% from the previous quarter. On the other hand, there were a total of 21 hedge funds with a bullish position in XENT at the beginning of this year. With hedge funds’ capital changing hands, there exists an “upper tier” of noteworthy hedge fund managers who were upping their stakes considerably (or already accumulated large positions). 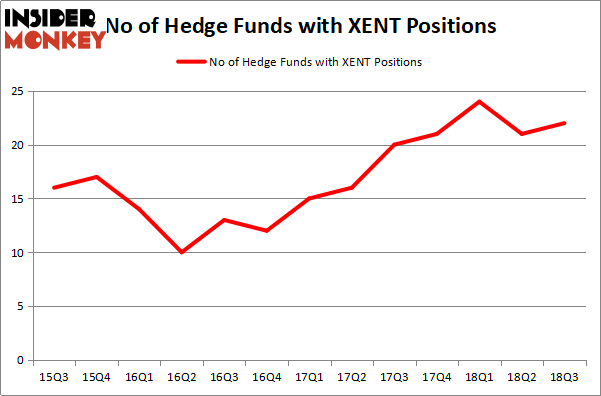 As you can see these stocks had an average of 8.75 hedge funds with bullish positions and the average amount invested in these stocks was $76 million. That figure was $214 million in XENT’s case. Tahoe Resources Inc (NYSE:TAHO) is the most popular stock in this table. On the other hand 0 is the least popular one with only 2 bullish hedge fund positions. Compared to these stocks Intersect ENT Inc (NASDAQ:XENT) is more popular among hedge funds. Considering that hedge funds are fond of this stock in relation to its market cap peers, it may be a good idea to analyze it in detail and potentially include it in your portfolio.

Hedge Funds Are Betting On Cooper-Standard Holdings Inc (CPS)
Monthly Newsletter Strategy
Download a free copy of our newsletter and see the details inside!
Hedge Fund Resource Center
Related News
Here is What Hedge Funds Think About Intersect ENT Inc (XENT) Intersect ENT Inc (XENT) Is An Opportunity To Get In On An Under Reaction Five Reasons You Need a Day-Trading Mentor 15 Most Important Medical Discoveries of 2018 The 10 Best Islands to Visit in 2019
Billionaire Hedge Funds