Is Infosys Limited (NYSE:INFY) a good investment right now? We check hedge fund and billionaire investor sentiment before delving into hours of research. Hedge funds spend millions of dollars on Ivy League graduates, expert networks, and get tips from industry insiders. They sometimes fail miserably but historically their consensus stock picks outperformed the market after adjusting for known risk factors.

Is Infosys Limited (NYSE:INFY) a splendid investment right now? The smart money is getting more bullish. The number of bullish hedge fund bets moved up by 2 lately. Our calculations also showed that INFY isn’t among the 30 most popular stocks among hedge funds.

Heading into the fourth quarter of 2018, a total of 18 of the hedge funds tracked by Insider Monkey held long positions in this stock, a change of 13% from one quarter earlier. Below, you can check out the change in hedge fund sentiment towards INFY over the last 13 quarters. So, let’s see which hedge funds were among the top holders of the stock and which hedge funds were making big moves. 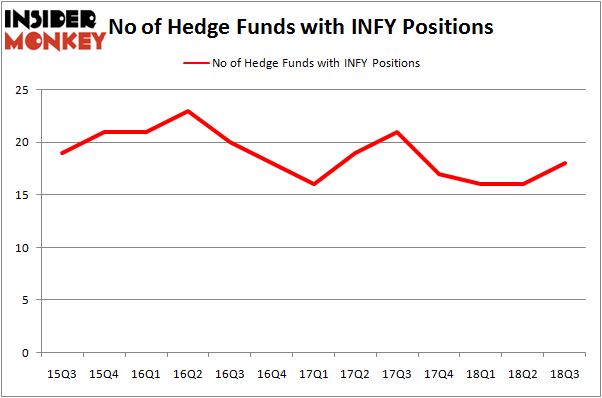 As you can see these stocks had an average of 24.75 hedge funds with bullish positions and the average amount invested in these stocks was $1.25 billion. That figure was $1.13 billion in INFY’s case. Cognizant Technology Solutions Corp (NASDAQ:CTSH) is the most popular stock in this table. On the other hand Mizuho Financial Group Inc. (NYSE:MFG) is the least popular one with only 3 bullish hedge fund positions. Infosys Limited (NYSE:INFY) is not the least popular stock in this group but hedge fund interest is still below average. This is a slightly negative signal and we’d rather spend our time researching stocks that hedge funds are piling on. In this regard CTSH might be a better candidate to consider a long position.

Is Ferro Corporation (FOE) Going to Burn These Hedge Funds?
Monthly Newsletter Strategy
Download a free copy of our newsletter and see the details inside!
Hedge Fund Resource Center
Related News
Billionaire Ken Fisher Loves This Indian IT Company Billionaire Ken Fisher is Bullish About These Dividend Stocks Five Indian Stocks Hedge Funds Are Fond of Here’s What You Need To Know About The Financial Markets Today Infosys Ltd ADR (INFY): Are Hedge Funds Right About This Stock? 5 Favorite Indian Stocks of Hedge Funds NVIDIA, IBM, Movado, and More Have Investors Buzzing This Morning 11 Countries With The Worst Modern Music In The World The Top 5 Robo Advisor Apps of 2018 Five Reasons You Need a Day-Trading Mentor
Billionaire Hedge Funds