A whopping number of 13F filings filed with U.S. Securities and Exchange Commission has been processed by Insider Monkey so that individual investors can look at the overall hedge fund sentiment towards the stocks included in their watchlists. These freshly-submitted public filings disclose money managers’ equity positions as of the end of the three-month period that ended September 30, so let’s proceed with the discussion of the hedge fund sentiment on Heron Therapeutics Inc (NASDAQ:HRTX).

Is Heron Therapeutics Inc (NASDAQ:HRTX) a buy right now? Prominent investors are becoming hopeful. The number of long hedge fund bets advanced by 6 in recent months. Our calculations also showed that HRTX isn’t among the 30 most popular stocks among hedge funds. HRTX was in 31 hedge funds’ portfolios at the end of September. There were 25 hedge funds in our database with HRTX holdings at the end of the previous quarter.

How have hedgies been trading Heron Therapeutics Inc (NASDAQ:HRTX)? 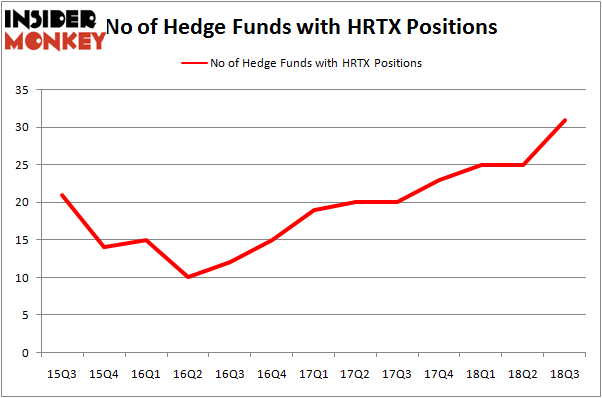 The largest stake in Heron Therapeutics Inc (NASDAQ:HRTX) was held by Tang Capital Management, which reported holding $188.3 million worth of stock at the end of September. It was followed by Baker Bros. Advisors with a $159.1 million position. Other investors bullish on the company included Bridger Management, Rubric Capital Management, and Citadel Investment Group.

As one would reasonably expect, key hedge funds were breaking ground themselves. Balyasny Asset Management, managed by Dmitry Balyasny, initiated the most outsized position in Heron Therapeutics Inc (NASDAQ:HRTX). Balyasny Asset Management had $10 million invested in the company at the end of the quarter. Isaac Corre’s Governors Lane also initiated a $6.3 million position during the quarter. The other funds with new positions in the stock are Ori Hershkovitz’s Nexthera Capital, Benjamin A. Smith’s Laurion Capital Management, and Isaac Corre’s Governors Lane.

As you can see these stocks had an average of 21 hedge funds with bullish positions and the average amount invested in these stocks was $291 million. That figure was $785 million in HRTX’s case. Tandem Diabetes Care Inc (NASDAQ:TNDM) is the most popular stock in this table. On the other hand Mallinckrodt Public Limited Company (NYSE:MNK) is the least popular one with only 20 bullish hedge fund positions. Compared to these stocks Heron Therapeutics Inc (NASDAQ:HRTX) is more popular among hedge funds. Considering that hedge funds are fond of this stock in relation to its market cap peers, it may be a good idea to analyze it in detail and potentially include it in your portfolio.