Herman Miller, Inc. (NASDAQ:MLHR) shareholders have witnessed an increase in hedge fund interest in recent months. Our calculations also showed that mlhr isn’t among the 30 most popular stocks among hedge funds. 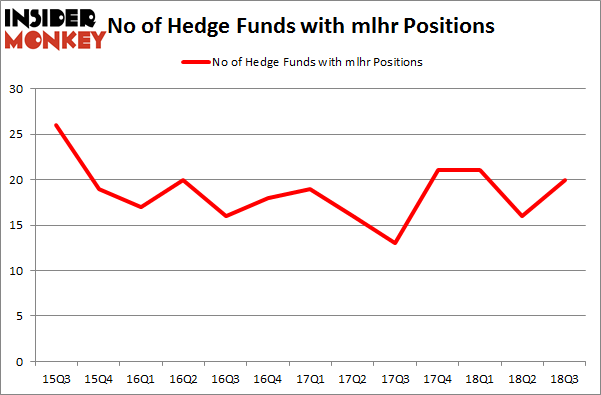 Among these funds, Royce & Associates held the most valuable stake in Herman Miller, Inc. (NASDAQ:MLHR), which was worth $52.4 million at the end of the third quarter. On the second spot was AQR Capital Management which amassed $18.1 million worth of shares. Moreover, Millennium Management, GLG Partners, and Renaissance Technologies were also bullish on Herman Miller, Inc. (NASDAQ:MLHR), allocating a large percentage of their portfolios to this stock.

With a general bullishness amongst the heavyweights, key money managers were breaking ground themselves. Millennium Management, managed by Israel Englander, created the largest position in Herman Miller, Inc. (NASDAQ:MLHR). Millennium Management had $12.6 million invested in the company at the end of the quarter. Jim Simons’s Renaissance Technologies also initiated a $10.3 million position during the quarter. The other funds with new positions in the stock are Peter Algert and Kevin Coldiron’s Algert Coldiron Investors, Matthew Hulsizer’s PEAK6 Capital Management, and Matthew Tewksbury’s Stevens Capital Management.

Let’s go over hedge fund activity in other stocks similar to Herman Miller, Inc. (NASDAQ:MLHR). We will take a look at Jack in the Box Inc. (NASDAQ:JACK), Trustmark Corp (NASDAQ:TRMK), Arena Pharmaceuticals, Inc. (NASDAQ:ARNA), and B2Gold Corp (NYSE:BTG). This group of stocks’ market values are similar to MLHR’s market value.

As you can see these stocks had an average of 19 hedge funds with bullish positions and the average amount invested in these stocks was $247 million. That figure was $135 million in MLHR’s case. Jack in the Box Inc. (NASDAQ:JACK) is the most popular stock in this table. On the other hand Trustmark Corp (NASDAQ:TRMK) is the least popular one with only 11 bullish hedge fund positions. Herman Miller, Inc. (NASDAQ:MLHR) is not the most popular stock in this group but hedge fund interest is still above average. This is a slightly positive signal but we’d rather spend our time researching stocks that hedge funds are piling on. In this regard JACK might be a better candidate to consider a long position.