Hedge Funds Are Buying General Motors Company (NYSE:GM) But Will the Buying Spree Continue As Fight with Trump Looms

There are several ways to beat the market, and investing in small cap stocks has historically been one of them. We like to improve the odds of beating the market further by examining what famous hedge fund operators such as Carl Icahn and George Soros think. Those hedge fund operators make billions of dollars each year by hiring the best and the brightest to do research on stocks, including small cap stocks that big brokerage houses simply don’t cover. Because of Carl Icahn and other elite funds’ exemplary historical records, we pay attention to their small cap picks. In this article, we use hedge fund filing data to analyze General Motors Company (NYSE:GM).

General Motors recently announced it was laying off more than 14,000 people and shuttering plants in the United States and Canada. The move drew President Donald Trump’s ire, who said that he would consider pulling the plug on its subsidies as retaliation for the layoffs.

Trump promised to revive U.S. manufacturing in the runup to the 2016 presidential election and has been vocal regarding companies that shut down American operations or consider moving production overseas.  The company’s shares tanked after the announcement, with many pundits expecting the stock to drop further as its battles with the President intensify.

At Q3’s end, a total of 61 of the hedge funds tracked by Insider Monkey were bullish on this stock, a change of 3% from the second quarter of 2018. By comparison, 61 hedge funds held shares or bullish call options in GM heading into this year. With hedgies’ capital changing hands, there exists a select group of noteworthy hedge fund managers who were adding to their holdings significantly (or already accumulated large positions). 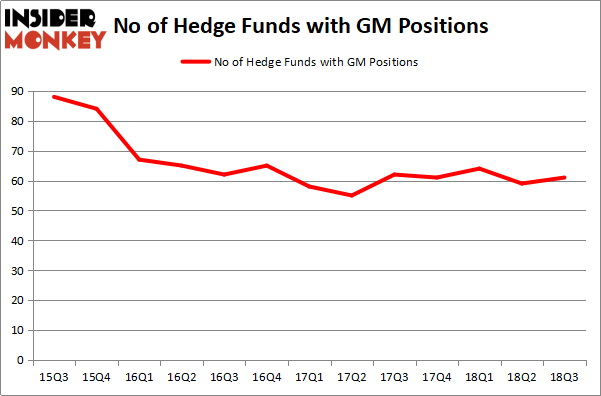 Of the funds tracked by Insider Monkey, Warren Buffett’s Berkshire Hathaway has the largest position in General Motors Company (NYSE:GM), worth close to $1.7664 billion, corresponding to 0.8% of its total 13F portfolio. The second largest stake is held by Boykin Curry of Eagle Capital Management, with a $705.3 million position; 2.4% of its 13F portfolio is allocated to the stock. Other hedge funds and institutional investors that hold long positions include Edgar Wachenheim’s Greenhaven Associates, David Einhorn’s Greenlight Capital and John A. Levin’s Levin Capital Strategies.

As you can see these stocks had an average of 29.25 hedge funds with bullish positions and the average amount invested in these stocks was $936 million. That figure was $4747 million in GM’s case. American International Group Inc (NYSE:AIG) is the most popular stock in this table. On the other hand Banco Bradesco SA (NYSE:BBD) is the least popular one with only 14 bullish hedge fund positions. Compared to these stocks General Motors Company (NYSE:GM) is more popular among hedge funds. Considering that hedge funds are fond of this stock in relation to its market cap peers, it may be a good idea to analyze it in detail and potentially include it in your portfolio.