Before we spend days researching a stock idea we’d like to take a look at how hedge funds and billionaire investors recently traded that stock. S&P 500 Index ETF (SPY) lost 8.7% through October 26th. Forty percent of the S&P 500 constituents were down more than 10%. The average return of a randomly picked stock in the index is -9.5%. This means you (or a monkey throwing a dart) have less than an even chance of beating the market by randomly picking a stock. On the other hand, the top 25 most popular S&P 500 stocks among hedge funds had an average loss of 8.8%. In this article, we will take a look at what hedge funds think about First Interstate Bancsystem Inc (NASDAQ:FIBK).

Is First Interstate Bancsystem Inc (NASDAQ:FIBK) an exceptional stock to buy now? Investors who are in the know are getting more optimistic. The number of bullish hedge fund bets inched up by 1 in recent months. Our calculations also showed that FIBK isn’t among the 30 most popular stocks among hedge funds.

Heading into the fourth quarter of 2018, a total of 12 of the hedge funds tracked by Insider Monkey held long positions in this stock, a change of 9% from one quarter earlier. On the other hand, there were a total of 10 hedge funds with a bullish position in FIBK at the beginning of this year. With hedgies’ sentiment swirling, there exists a few notable hedge fund managers who were adding to their stakes meaningfully (or already accumulated large positions). 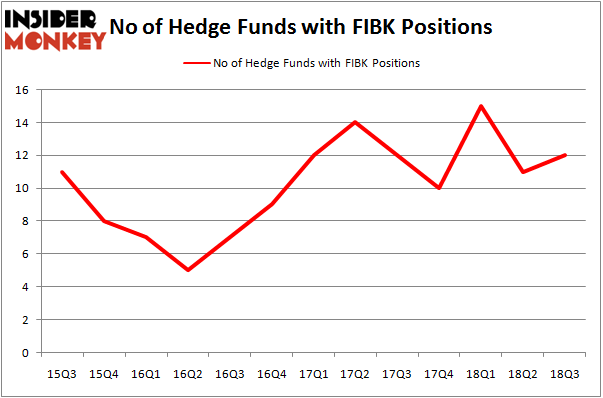 According to Insider Monkey’s hedge fund database, Israel Englander’s Millennium Management has the biggest position in First Interstate Bancsystem Inc (NASDAQ:FIBK), worth close to $28 million, comprising less than 0.1%% of its total 13F portfolio. The second most bullish fund manager is Renaissance Technologies, led by Jim Simons, holding a $17.9 million position; the fund has less than 0.1%% of its 13F portfolio invested in the stock. Some other members of the smart money that are bullish include Cliff Asness’s AQR Capital Management, John Overdeck and David Siegel’s Two Sigma Advisors and Anton Schutz’s Mendon Capital Advisors.

Let’s check out hedge fund activity in other stocks – not necessarily in the same industry as First Interstate Bancsystem Inc (NASDAQ:FIBK) but similarly valued. We will take a look at Oceaneering International (NYSE:OII), Simmons First National Corporation (NASDAQ:SFNC), Deluxe Corporation (NYSE:DLX), and Industrias Bachoco, S.A.B. de C.V. (NYSE:IBA). All of these stocks’ market caps are closest to FIBK’s market cap.

As you can see these stocks had an average of 11.25 hedge funds with bullish positions and the average amount invested in these stocks was $97 million. That figure was $65 million in FIBK’s case. Deluxe Corporation (NYSE:DLX) is the most popular stock in this table. On the other hand Industrias Bachoco, S.A.B. de C.V. (NYSE:IBA) is the least popular one with only 3 bullish hedge fund positions. First Interstate Bancsystem Inc (NASDAQ:FIBK) is not the most popular stock in this group but hedge fund interest is still above average. This is a slightly positive signal but we’d rather spend our time researching stocks that hedge funds are piling on. In this regard DLX might be a better candidate to consider a long position.