Hedge fund managers like David Einhorn, Dan Loeb, or Carl Icahn became billionaires through reaping large profits for their investors, which is why piggybacking their stock picks may provide us with significant returns as well. Many hedge funds, like Paul Singer’s Elliott Management, are pretty secretive, but we can still get some insights by analyzing their quarterly 13F filings. One of the most fertile grounds for large abnormal returns is hedge funds’ most popular small-cap picks, which are not so widely followed and often trade at a discount to their intrinsic value. In this article we will check out hedge fund activity in another small-cap stock: Eaton Corporation plc (NYSE:ETN).

Eaton Corporation plc (NYSE:ETN) investors should pay attention to an increase in hedge fund sentiment of late. Our calculations also showed that ETN isn’t among the 30 most popular stocks among hedge funds.

At the end of the third quarter, a total of 38 of the hedge funds tracked by Insider Monkey were long this stock, a change of 27% from the second quarter of 2018. The graph below displays the number of hedge funds with bullish position in ETN over the last 13 quarters. With hedge funds’ positions undergoing their usual ebb and flow, there exists a few notable hedge fund managers who were boosting their stakes substantially (or already accumulated large positions). 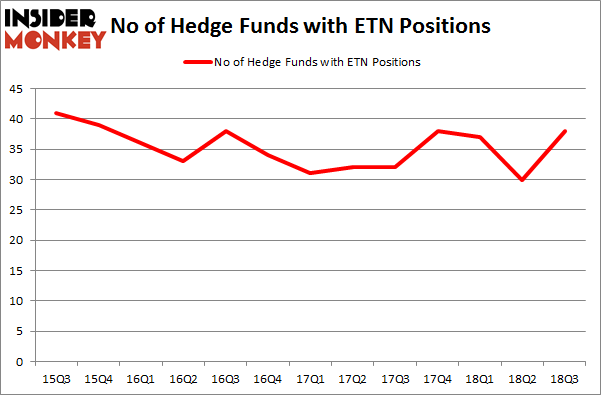 Of the funds tracked by Insider Monkey, Levin Capital Strategies, managed by John A. Levin, holds the largest position in Eaton Corporation plc (NYSE:ETN). Levin Capital Strategies has a $188.8 million position in the stock, comprising 3.2% of its 13F portfolio. Coming in second is Cliff Asness of AQR Capital Management, with a $163.2 million position; 0.2% of its 13F portfolio is allocated to the company. Some other hedge funds and institutional investors that hold long positions consist of Israel Englander’s Millennium Management, Anand Parekh’s Alyeska Investment Group and Robert Polak’s Anchor Bolt Capital.

Let’s go over hedge fund activity in other stocks – not necessarily in the same industry as Eaton Corporation plc (NYSE:ETN) but similarly valued. These stocks are Aon plc (NYSE:AON), Baker Hughes, a GE company (NYSE:BHGE), V.F. Corporation (NYSE:VFC), and Ross Stores, Inc. (NASDAQ:ROST). All of these stocks’ market caps are closest to ETN’s market cap.

As you can see these stocks had an average of 30 hedge funds with bullish positions and the average amount invested in these stocks was $1.51 billion. That figure was $965 million in ETN’s case. V.F. Corporation (NYSE:VFC) is the most popular stock in this table. On the other hand Baker Hughes, a GE company (NYSE:BHGE) is the least popular one with only 27 bullish hedge fund positions. Compared to these stocks Eaton Corporation plc (NYSE:ETN) is more popular among hedge funds. Considering that hedge funds are fond of this stock in relation to its market cap peers, it may be a good idea to analyze it in detail and potentially include it in your portfolio.