Coronavirus is probably the #1 concern in investors’ minds right now. It should be. On February 27th we published an article with the title Recession is Imminent: We Need A Travel Ban NOW. We predicted that a US recession is imminent and US stocks will go down by at least 20% in the next 3-6 months. We also told you to short the market ETFs and buy long-term bonds. Investors who agreed with us and replicated these trades are up double digits whereas the market is down double digits. Our article also called for a total international travel ban to prevent the spread of the coronavirus especially from Europe. We were one step ahead of the markets and the president. In these volatile markets we scrutinize hedge fund filings to get a reading on which direction each stock might be going. The 800+ hedge funds and famous money managers tracked by Insider Monkey have already compiled and submitted their 13F filings for the fourth quarter, which unveil their equity positions as of December 31. We went through these filings, fixed typos and other more significant errors and identified the changes in hedge fund portfolios. Our extensive review of these public filings is finally over, so this article is set to reveal the smart money sentiment towards Deere & Company (NYSE:DE).

Is Deere & Company (NYSE:DE) a buy here? Money managers are betting on the stock. The number of long hedge fund positions went up by 9 recently. Our calculations also showed that DE isn’t among the 30 most popular stocks among hedge funds (click for Q4 rankings and see the video below for Q3 rankings). DE was in 50 hedge funds’ portfolios at the end of December. There were 41 hedge funds in our database with DE positions at the end of the previous quarter.

Today there are tons of metrics shareholders have at their disposal to assess stocks. A duo of the less utilized metrics are hedge fund and insider trading interest. Our researchers have shown that, historically, those who follow the top picks of the elite fund managers can outclass the market by a very impressive amount (see the details here).

We leave no stone unturned when looking for the next great investment idea. For example Europe is set to become the world’s largest cannabis market, so we check out this European marijuana stock pitch. We read hedge fund investor letters and listen to stock pitches at hedge fund conferences, and and go through short-term trade recommendations like this one. We even check out the recommendations of services with hard to believe track records. In January, we recommended a long position in one of the most shorted stocks in the market, and that stock returned more than 50% despite the large losses in the market since our recommendation. Keeping this in mind let’s take a look at the fresh hedge fund action surrounding Deere & Company (NYSE:DE).

How have hedgies been trading Deere & Company (NYSE:DE)?

At Q4’s end, a total of 50 of the hedge funds tracked by Insider Monkey held long positions in this stock, a change of 22% from the third quarter of 2019. By comparison, 47 hedge funds held shares or bullish call options in DE a year ago. With hedgies’ sentiment swirling, there exists an “upper tier” of notable hedge fund managers who were upping their stakes meaningfully (or already accumulated large positions). 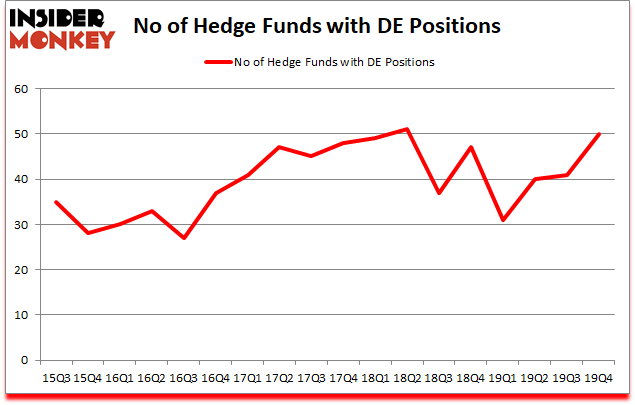 The largest stake in Deere & Company (NYSE:DE) was held by Citadel Investment Group, which reported holding $305.2 million worth of stock at the end of September. It was followed by Markel Gayner Asset Management with a $174.3 million position. Other investors bullish on the company included Balyasny Asset Management, Generation Investment Management, and Two Sigma Advisors. In terms of the portfolio weights assigned to each position Firefly Value Partners allocated the biggest weight to Deere & Company (NYSE:DE), around 7.83% of its 13F portfolio. Alight Capital is also relatively very bullish on the stock, earmarking 5.59 percent of its 13F equity portfolio to DE.

As aggregate interest increased, key hedge funds have been driving this bullishness. Carlson Capital, managed by Clint Carlson, initiated the most valuable position in Deere & Company (NYSE:DE). Carlson Capital had $34.7 million invested in the company at the end of the quarter. Paul Marshall and Ian Wace’s Marshall Wace LLP also made a $11.8 million investment in the stock during the quarter. The other funds with new positions in the stock are Gregg Moskowitz’s Interval Partners, Jonathan Barrett and Paul Segal’s Luminus Management, and Louis Bacon’s Moore Global Investments.

Let’s check out hedge fund activity in other stocks similar to Deere & Company (NYSE:DE). We will take a look at The Sherwin-Williams Company (NYSE:SHW), Biogen Inc. (NASDAQ:BIIB), Advanced Micro Devices, Inc. (NASDAQ:AMD), and ServiceNow Inc (NYSE:NOW). All of these stocks’ market caps are closest to DE’s market cap.

As you can see these stocks had an average of 61 hedge funds with bullish positions and the average amount invested in these stocks was $3377 million. That figure was $1403 million in DE’s case. ServiceNow Inc (NYSE:NOW) is the most popular stock in this table. On the other hand Advanced Micro Devices, Inc. (NASDAQ:AMD) is the least popular one with only 53 bullish hedge fund positions. Compared to these stocks Deere & Company (NYSE:DE) is even less popular than AMD. Hedge funds dodged a bullet by taking a bearish stance towards DE. Our calculations showed that the top 20 most popular hedge fund stocks returned 41.3% in 2019 and outperformed the S&P 500 ETF (SPY) by 10.1 percentage points. These stocks lost 11.7% in 2020 through March 11th but managed to beat the market by 3.1 percentage points. Unfortunately DE wasn’t nearly as popular as these 20 stocks (hedge fund sentiment was very bearish); DE investors were disappointed as the stock returned -15.8% during the same time period and underperformed the market. If you are interested in investing in large cap stocks with huge upside potential, you should check out the top 20 most popular stocks among hedge funds as most of these stocks already outperformed the market so far in Q1.