At Insider Monkey, we pore over the filings of more than 700 top investment firms every quarter, a process we have now completed for the latest reporting period. The data we’ve gathered as a result gives us access to a wealth of collective knowledge based on these firms’ portfolio holdings as of September 30. In this article, we will use that wealth of knowledge to determine whether or not Clearwater Paper Corp (NYSE:CLW) makes for a good investment right now.

Clearwater Paper Corp (NYSE:CLW) has seen an increase in hedge fund sentiment of late. CLW was in 10 hedge funds’ portfolios at the end of September. There were 7 hedge funds in our database with CLW holdings at the end of the previous quarter. Our calculations also showed that CLW isn’t among the 30 most popular stocks among hedge funds.

How have hedgies been trading Clearwater Paper Corp (NYSE:CLW)? 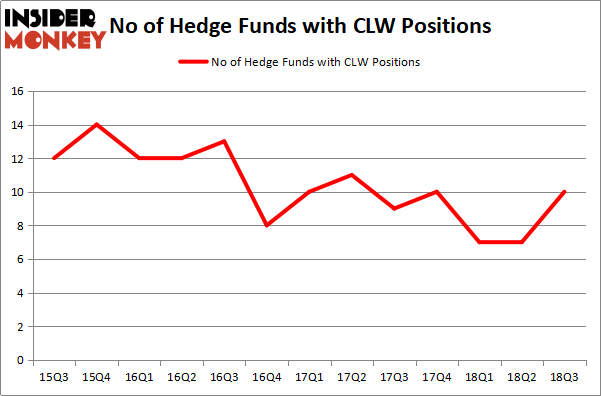 Among these funds, Sabrepoint Capital held the most valuable stake in Clearwater Paper Corp (NYSE:CLW), which was worth $13.3 million at the end of the third quarter. On the second spot was Water Street Capital which amassed $5.8 million worth of shares. Moreover, Blue Mountain Capital, Two Sigma Advisors, and Algert Coldiron Investors were also bullish on Clearwater Paper Corp (NYSE:CLW), allocating a large percentage of their portfolios to this stock.

With a general bullishness amongst the heavyweights, some big names were leading the bulls’ herd. Sabrepoint Capital, managed by George Baxter, assembled the most outsized position in Clearwater Paper Corp (NYSE:CLW). Sabrepoint Capital had $13.3 million invested in the company at the end of the quarter. Gilchrist Berg’s Water Street Capital also initiated a $5.8 million position during the quarter. The other funds with new positions in the stock are Israel Englander’s Millennium Management, Noam Gottesman’s GLG Partners, and Frederick DiSanto’s Ancora Advisors.

As you can see these stocks had an average of 5.75 hedge funds with bullish positions and the average amount invested in these stocks was $98 million. That figure was $26 million in CLW’s case. Minerva Neurosciences, Inc (NASDAQ:NERV) is the most popular stock in this table. On the other hand TORM plc (NASDAQ:TRMD) is the least popular one with only 2 bullish hedge fund positions. Compared to these stocks Clearwater Paper Corp (NYSE:CLW) is more popular among hedge funds. Considering that hedge funds are fond of this stock in relation to its market cap peers, it may be a good idea to analyze it in detail and potentially include it in your portfolio.