Cerner Corporation (NASDAQ:CERN) investors should pay attention to an increase in hedge fund interest lately. CERN was in 25 hedge funds’ portfolios at the end of September. There were 22 hedge funds in our database with CERN positions at the end of the previous quarter. Our calculations also showed that cern isn’t among the 30 most popular stocks among hedge funds.

How have hedgies been trading Cerner Corporation (NASDAQ:CERN)?

Heading into the fourth quarter of 2018, a total of 25 of the hedge funds tracked by Insider Monkey were bullish on this stock, a change of 14% from the previous quarter. The graph below displays the number of hedge funds with bullish position in CERN over the last 13 quarters. With the smart money’s positions undergoing their usual ebb and flow, there exists a few noteworthy hedge fund managers who were increasing their stakes meaningfully (or already accumulated large positions). 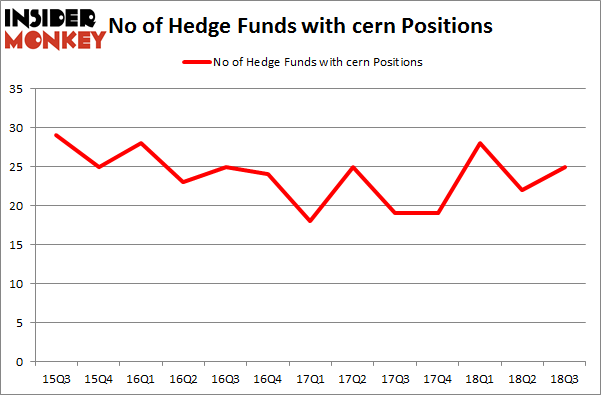 Among these funds, Generation Investment Management held the most valuable stake in Cerner Corporation (NASDAQ:CERN), which was worth $503.2 million at the end of the third quarter. On the second spot was Arrowstreet Capital which amassed $69.6 million worth of shares. Moreover, Two Sigma Advisors, Renaissance Technologies, and Healthcor Management LP were also bullish on Cerner Corporation (NASDAQ:CERN), allocating a large percentage of their portfolios to this stock.

Now, some big names were breaking ground themselves. Point72 Asset Management, managed by Steve Cohen, established the largest position in Cerner Corporation (NASDAQ:CERN). Point72 Asset Management had $16.2 million invested in the company at the end of the quarter. Jeffrey Talpins’s Element Capital Management also made a $1.5 million investment in the stock during the quarter. The other funds with new positions in the stock are Andrew Feldstein and Stephen Siderow’s Blue Mountain Capital and Alec Litowitz and Ross Laser’s Magnetar Capital.

As you can see these stocks had an average of 29.25 hedge funds with bullish positions and the average amount invested in these stocks was $1.17 billion. That figure was $890 million in CERN’s case. Palo Alto Networks Inc (NYSE:PANW) is the most popular stock in this table. On the other hand POSCO (NYSE:PKX) is the least popular one with only 14 bullish hedge fund positions. Cerner Corporation (NASDAQ:CERN) is not the least popular stock in this group but hedge fund interest is still below average. This is a slightly negative signal and we’d rather spend our time researching stocks that hedge funds are piling on. In this regard PANW might be a better candidate to consider a long position.