During the first half of the fourth quarter the Russell 2000 ETF (IWM) lagged the larger S&P 500 ETF (SPY) by about 4 percentage points as investors worried over the possible ramifications of rising interest rates. The hedge funds and institutional investors we track typically invest more in smaller-cap stocks than an average investor (i.e. only 298 S&P 500 constituents were among the 500 most popular stocks among hedge funds), and we have seen data that shows those funds paring back their overall exposure. Those funds cutting positions in small-caps is one reason why volatility has increased. In the following paragraphs, we take a closer look at what hedge funds and prominent investors think of Athene Holding Ltd. (NYSE:ATH) and see how the stock is affected by the recent hedge fund activity.

Is Athene Holding Ltd. (NYSE:ATH) a healthy stock for your portfolio? The smart money is in a bullish mood. The number of bullish hedge fund positions increased by 6 lately. Our calculations also showed that ATH isn’t among the 30 most popular stocks among hedge funds.

Today there are dozens of formulas shareholders employ to assess stocks. A duo of the less utilized formulas are hedge fund and insider trading interest. Our researchers have shown that, historically, those who follow the top picks of the best money managers can beat the broader indices by a superb margin (see the details here).

What does the smart money think about Athene Holding Ltd. (NYSE:ATH)?

At the end of the third quarter, a total of 42 of the hedge funds tracked by Insider Monkey held long positions in this stock, a change of 17% from the previous quarter. On the other hand, there were a total of 38 hedge funds with a bullish position in ATH at the beginning of this year. With hedge funds’ sentiment swirling, there exists an “upper tier” of notable hedge fund managers who were increasing their holdings substantially (or already accumulated large positions). 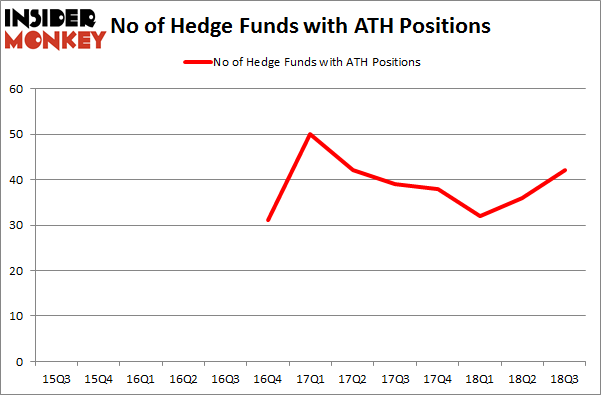 The largest stake in Athene Holding Ltd. (NYSE:ATH) was held by Brahman Capital, which reported holding $194.6 million worth of stock at the end of September. It was followed by Citadel Investment Group with a $160.5 million position. Other investors bullish on the company included Samlyn Capital, Point72 Asset Management, and King Street Capital.

As aggregate interest increased, some big names have been driving this bullishness. Citadel Investment Group, managed by Ken Griffin, initiated the most outsized call position in Athene Holding Ltd. (NYSE:ATH). Citadel Investment Group had $12 million invested in the company at the end of the quarter. Paul Marshall and Ian Wace’s Marshall Wace LLP also made a $11 million investment in the stock during the quarter. The other funds with new positions in the stock are George McCabe’s Portolan Capital Management, Benjamin A. Smith’s Laurion Capital Management, and George Zweig, Shane Haas and Ravi Chander’s Signition LP.

As you can see these stocks had an average of 27 hedge funds with bullish positions and the average amount invested in these stocks was $852 million. That figure was $1.78 billion in ATH’s case. Michael Kors Holdings Ltd (NYSE:KORS) is the most popular stock in this table. On the other hand Fibria Celulose SA (NYSE:FBR) is the least popular one with only 6 bullish hedge fund positions. Athene Holding Ltd. (NYSE:ATH) is not the most popular stock in this group but hedge fund interest is still above average. This is a slightly positive signal but we’d rather spend our time researching stocks that hedge funds are piling on. In this regard KORS might be a better candidate to consider a long position.