A market correction in the fourth quarter, spurred by a number of global macroeconomic concerns and rising interest rates ended up having a negative impact on the markets and many hedge funds as a result. The stocks of smaller companies were especially hard hit during this time as investors fled to investments seen as being safer. This is evident in the fact that the Russell 2000 ETF underperformed the S&P 500 ETF by 4 percentage points during the first half of the fourth quarter. We also received indications that hedge funds were trimming their positions amid the market volatility and uncertainty, and given their greater inclination towards smaller cap stocks than other investors, it follows that a stronger sell-off occurred in those stocks. Let’s study the hedge fund sentiment to see how those concerns affected their ownership of Syneos Health, Inc. (NASDAQ:SYNH) during the quarter.

Syneos Health, Inc. (NASDAQ:SYNH) shareholders have witnessed an increase in support from the world’s most elite money managers recently. SYNH was in 27 hedge funds’ portfolios at the end of the third quarter of 2018. There were 19 hedge funds in our database with SYNH positions at the end of the previous quarter. Our calculations also showed that synh isn’t among the 30 most popular stocks among hedge funds.

How have hedgies been trading Syneos Health, Inc. (NASDAQ:SYNH)?

At Q3’s end, a total of 27 of the hedge funds tracked by Insider Monkey were long this stock, a change of 42% from one quarter earlier. The graph below displays the number of hedge funds with bullish position in SYNH over the last 13 quarters. With the smart money’s sentiment swirling, there exists a few key hedge fund managers who were increasing their holdings substantially (or already accumulated large positions). 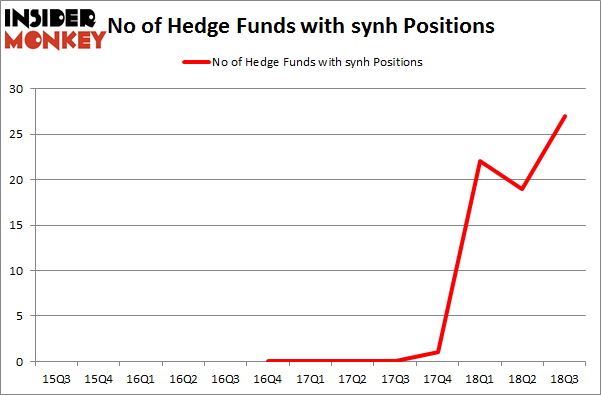 When looking at the institutional investors followed by Insider Monkey, Viking Global, managed by Andreas Halvorsen, holds the number one position in Syneos Health, Inc. (NASDAQ:SYNH). Viking Global has a $93 million position in the stock, comprising 0.5% of its 13F portfolio. The second largest stake is held by Millennium Management, led by Israel Englander, holding a $66.8 million position; 0.1% of its 13F portfolio is allocated to the company. Some other members of the smart money with similar optimism encompass Amit Nitin Doshi’s Harbor Spring Capital, Jeffrey Talpins’s Element Capital Management and Amy Minella’s Cardinal Capital.

Now, specific money managers have been driving this bullishness. Element Capital Management, managed by Jeffrey Talpins, established the biggest position in Syneos Health, Inc. (NASDAQ:SYNH). Element Capital Management had $33.4 million invested in the company at the end of the quarter. Alec Litowitz and Ross Laser’s Magnetar Capital also made a $7.6 million investment in the stock during the quarter. The other funds with new positions in the stock are Noam Gottesman’s GLG Partners, John Brennan’s Sirios Capital Management, and Paul Marshall and Ian Wace’s Marshall Wace LLP.

As you can see these stocks had an average of 23.5 hedge funds with bullish positions and the average amount invested in these stocks was $647 million. That figure was $414 million in SYNH’s case. Dun & Bradstreet Corporation (NYSE:DNB) is the most popular stock in this table. On the other hand Brixmor Property Group Inc (NYSE:BRX) is the least popular one with only 18 bullish hedge fund positions. Syneos Health, Inc. (NASDAQ:SYNH) is not the most popular stock in this group but hedge fund interest is still above average. This is a slightly positive signal but we’d rather spend our time researching stocks that hedge funds are piling on. In this regard DNB might be a better candidate to consider a long position.

Is Customers Bancorp (CUBI) A Good Stock To Buy?
Monthly Newsletter Strategy
Download a free copy of our newsletter and see the details inside!
Hedge Fund Resource Center
Related News
The 10 Best Islands to Visit in 2019 5 Most Socially Responsible Companies in America 5 Ways You Can Eliminate Credit Card Debt
Billionaire Hedge Funds