Investing in small cap stocks has historically been a way to outperform the market, as small cap companies typically grow faster on average than the blue chips. That outperformance comes with a price, however, as there are occasional periods of higher volatility. The one and a half month time period since the end of the third quarter is one of those periods, as the Russell 2000 ETF (IWM) has underperformed the larger S&P 500 ETF (SPY) by about 4 percentage points. Given that the funds we track tend to have a disproportionate amount of their portfolios in smaller cap stocks, they have seen some volatility in their portfolios too. Actually their moves are potentially one of the factors that contributed to this volatility. In this article, we use our extensive database of hedge fund holdings to find out what the smart money thinks of Switch, Inc. (NYSE:SWCH).

Switch, Inc. (NYSE:SWCH) investors should pay attention to an increase in enthusiasm from smart money recently. SWCH was in 12 hedge funds’ portfolios at the end of the third quarter of 2018. There were 9 hedge funds in our database with SWCH positions at the end of the previous quarter. Our calculations also showed that swch isn’t among the 30 most popular stocks among hedge funds.

What have hedge funds been doing with Switch, Inc. (NYSE:SWCH)? 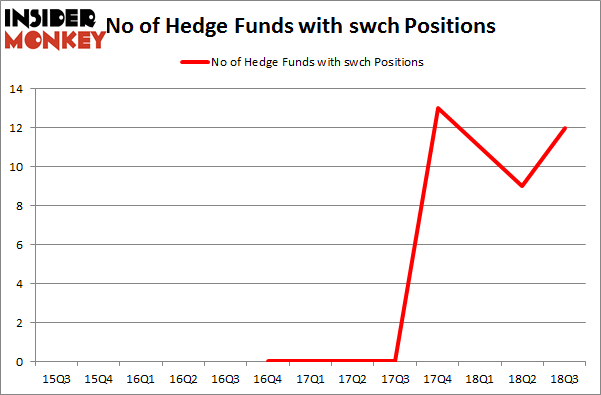 As you can see these stocks had an average of 23.75 hedge funds with bullish positions and the average amount invested in these stocks was $327 million. That figure was $161 million in SWCH’s case. argenx SE (NASDAQ:ARGX) is the most popular stock in this table. On the other hand First Interstate Bancsystem Inc (NASDAQ:FIBK) is the least popular one with only 12 bullish hedge fund positions. Compared to these stocks Switch, Inc. (NYSE:SWCH) is even less popular than FIBK. Considering that hedge funds aren’t fond of this stock in relation to other companies analyzed in this article, it may be a good idea to analyze it in detail and understand why the smart money isn’t behind this stock. This isn’t necessarily bad news. Although it is possible that hedge funds may think the stock is overpriced and view the stock as a short candidate, they may not be very familiar with the bullish thesis. In either case more research is warranted.