As we already know from media reports and hedge fund investor letters, many hedge funds lost money in October, blaming macroeconomic conditions and unpredictable events that hit several sectors, with healthcare among them. Nevertheless, most investors decided to stick to their bullish theses and their long-term focus allows us to profit from the recent declines. In particular, let’s take a look at what hedge funds think about Regis Corporation (NYSE:RGS) in this article.

Regis Corporation (NYSE:RGS) has experienced an increase in hedge fund interest in recent months. Our calculations also showed that rgs isn’t among the 30 most popular stocks among hedge funds.

In today’s marketplace there are numerous methods market participants use to size up their holdings. A duo of the less utilized methods are hedge fund and insider trading signals. Our researchers have shown that, historically, those who follow the top picks of the elite fund managers can trounce the broader indices by a significant margin (see the details here).

Heading into the fourth quarter of 2018, a total of 15 of the hedge funds tracked by Insider Monkey held long positions in this stock, a change of 7% from the second quarter of 2018. The graph below displays the number of hedge funds with bullish position in RGS over the last 13 quarters. With hedgies’ positions undergoing their usual ebb and flow, there exists a select group of noteworthy hedge fund managers who were upping their stakes substantially (or already accumulated large positions). 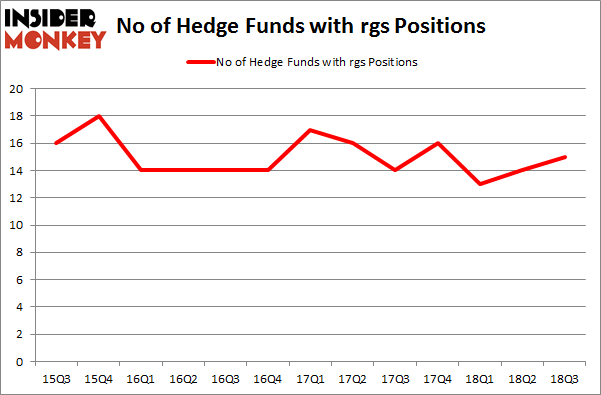 The largest stake in Regis Corporation (NYSE:RGS) was held by Renaissance Technologies, which reported holding $41 million worth of stock at the end of September. It was followed by Birch Run Capital with a $33.9 million position. Other investors bullish on the company included D E Shaw, Arrowstreet Capital, and First Pacific Advisors LLC.

Now, key money managers have jumped into Regis Corporation (NYSE:RGS) headfirst. Millennium Management, managed by Israel Englander, established the biggest position in Regis Corporation (NYSE:RGS). Millennium Management had $7.1 million invested in the company at the end of the quarter. Paul Marshall and Ian Wace’s Marshall Wace LLP also initiated a $6.6 million position during the quarter. The only other fund with a new position in the stock is Alec Litowitz and Ross Laser’s Magnetar Capital.

As you can see these stocks had an average of 16 hedge funds with bullish positions and the average amount invested in these stocks was $131 million. That figure was $139 million in RGS’s case. Ascena Retail Group Inc (NASDAQ:ASNA) is the most popular stock in this table. On the other hand Preferred Bank (NASDAQ:PFBC) is the least popular one with only 11 bullish hedge fund positions. Regis Corporation (NYSE:RGS) is not the least popular stock in this group but hedge fund interest is still below average. This is a slightly negative signal and we’d rather spend our time researching stocks that hedge funds are piling on. In this regard ASNA might be a better candidate to consider a long position.