There are several ways to beat the market, and investing in small cap stocks has historically been one of them. We like to improve the odds of beating the market further by examining what famous hedge fund operators such as Carl Icahn and George Soros think. Those hedge fund operators make billions of dollars each year by hiring the best and the brightest to do research on stocks, including small cap stocks that big brokerage houses simply don’t cover. Because of Carl Icahn and other successful funds’ exemplary historical records, we pay attention to their small cap picks. In this article, we use hedge fund filing data to analyze OSI Systems, Inc. (NASDAQ:OSIS) .

OSI Systems, Inc. (NASDAQ:OSIS) was in 15 hedge funds’ portfolios at the end of September. OSIS has seen an increase in hedge fund interest recently. There were 11 hedge funds in our database with OSIS holdings at the end of the previous quarter. At the end of this article we will also compare OSIS to other stocks including Smart & Final Stores Inc (NYSE:SFS), Group 1 Automotive, Inc. (NYSE:GPI), and Loral Space & Communications Ltd. (NASDAQ:LORL) to get a better sense of its popularity.

At Q3’s end, a total of 15 of the hedge funds tracked by Insider Monkey were long this stock, a rise of 36% from one quarter earlier. On the other hand, there were a total of 14 hedge funds with a bullish position in OSIS at the beginning of this year. With hedge funds’ capital changing hands, there exists an “upper tier” of key hedge fund managers who were boosting their holdings significantly (or already accumulated large positions). 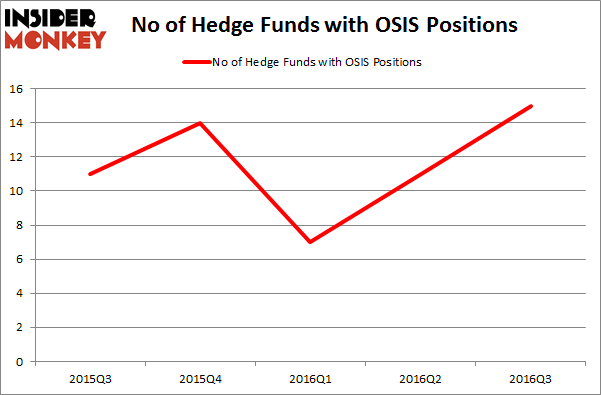 According to publicly available hedge fund and institutional investor holdings data compiled by Insider Monkey, Brett Barakett’s Tremblant Capital has the number one position in OSI Systems, Inc. (NASDAQ:OSIS), worth close to $29.7 million, corresponding to 1.7% of its total 13F portfolio. On Tremblant Capital’s heels is Josh Goldberg of G2 Investment Partners Management, with a $5.9 million position; the fund has 2.7% of its 13F portfolio invested in the stock. Remaining hedge funds and institutional investors that hold long positions encompass Israel Englander’s Millennium Management, and Mark Coe’s Coe Capital Management. We should note that none of these hedge funds are among our list of the 100 best performing hedge funds which is based on the performance of their 13F long positions in non-microcap stocks.

As industrywide interest jumped, some big names were breaking ground themselves. Daruma Asset Management, led by Mariko Gordon, assembled the largest position in OSI Systems, Inc. (NASDAQ:OSIS). Daruma Asset Management had $4 million invested in the company at the end of the quarter. Chuck Royce’s Royce & Associates also made a $3 million investment in the stock during the quarter. The following funds were also among the new OSIS investors: Jeffrey Moskowitz’s Harvey Partners, Jim Simons’ Renaissance Technologies, and Peter Rathjens, Bruce Clarke and John Campbell’s Arrowstreet Capital.

As you can see these stocks had an average of 16 hedge funds with bullish positions and the average amount invested in these stocks was $305 million. That figure was $56 million in OSIS’s case. Loral Space & Communications Ltd. (NASDAQ:LORL) is the most popular stock in this table. On the other hand Smart & Final Stores Inc (NYSE:SFS) is the least popular one with only 9 bullish hedge fund positions. OSI Systems, Inc. (NASDAQ:OSIS) is not the least popular stock in this group but hedge fund interest is still below average. This is a slightly negative signal and we’d rather spend our time researching stocks that hedge funds are piling on. In this regard LORL might be a better candidate to consider taking a long position in.