MGP Ingredients Inc (NASDAQ:MGPI) has seen an increase in hedge fund interest recently. MGPI was in 11 hedge funds’ portfolios at the end of the third quarter of 2018. There were 8 hedge funds in our database with MGPI holdings at the end of the previous quarter. Our calculations also showed that mgpi isn’t among the 30 most popular stocks among hedge funds. 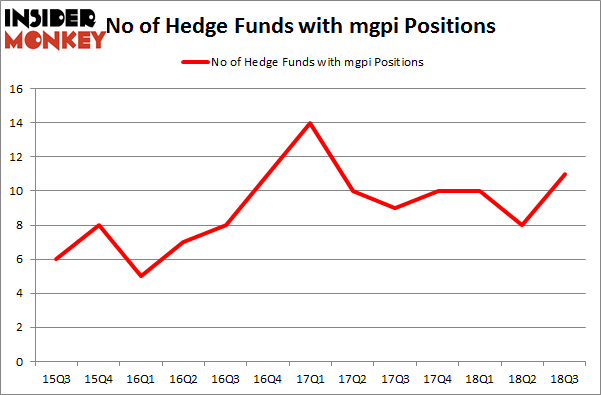 When looking at the institutional investors followed by Insider Monkey, Amy Minella’s Cardinal Capital has the number one position in MGP Ingredients Inc (NASDAQ:MGPI), worth close to $16.6 million, comprising 0.5% of its total 13F portfolio. The second largest stake is held by Manatuck Hill Partners, managed by Mark Broach, which holds a $10.4 million position; 3.9% of its 13F portfolio is allocated to the company. Other peers that hold long positions encompass Mark N. Diker’s Diker Management, Richard Driehaus’s Driehaus Capital and Cliff Asness’s AQR Capital Management.

With a general bullishness amongst the heavyweights, specific money managers were leading the bulls’ herd. Ascend Capital, managed by Malcolm Fairbairn, created the biggest position in MGP Ingredients Inc (NASDAQ:MGPI). Ascend Capital had $2 million invested in the company at the end of the quarter. Ken Griffin’s Citadel Investment Group also initiated a $0.7 million position during the quarter. The other funds with brand new MGPI positions are Israel Englander’s Millennium Management, Noam Gottesman’s GLG Partners, and Brandon Haley’s Holocene Advisors.

As you can see these stocks had an average of 9.75 hedge funds with bullish positions and the average amount invested in these stocks was $55 million. That figure was $47 million in MGPI’s case. Pitney Bowes Inc. (NYSE:PBI) is the most popular stock in this table. On the other hand Blackrock Corporate High Yield Fund Inc (NYSE:HYT) is the least popular one with only 2 bullish hedge fund positions. MGP Ingredients Inc (NASDAQ:MGPI) is not the most popular stock in this group but hedge fund interest is still above average. This is a slightly positive signal but we’d rather spend our time researching stocks that hedge funds are piling on. In this regard PBI might be a better candidate to consider a long position.