Hedge funds are not perfect. They have their bad picks just like everyone else. Facebook, a stock hedge funds have loved, lost a third of its value since the end of July. Although hedge funds are not perfect, their consensus picks do deliver solid returns, however. Our data show the top 30 S&P 500 stocks among hedge funds at the end of September 2018 yielded an average return of 6.7% year-to-date, vs. a gain of 2.6% for the S&P 500 Index. Because hedge funds have a lot of resources and their consensus picks do well, we pay attention to what they think. In this article, we analyze what the elite funds think of Meritor Inc (NYSE:MTOR).

Is Meritor Inc (NYSE:MTOR) the right pick for your portfolio? The smart money is buying. The number of bullish hedge fund positions went up by 5 in recent months. Our calculations also showed that MTOR isn’t among the 30 most popular stocks among hedge funds. MTOR was in 24 hedge funds’ portfolios at the end of September. There were 19 hedge funds in our database with MTOR holdings at the end of the previous quarter.

What have hedge funds been doing with Meritor Inc (NYSE:MTOR)? 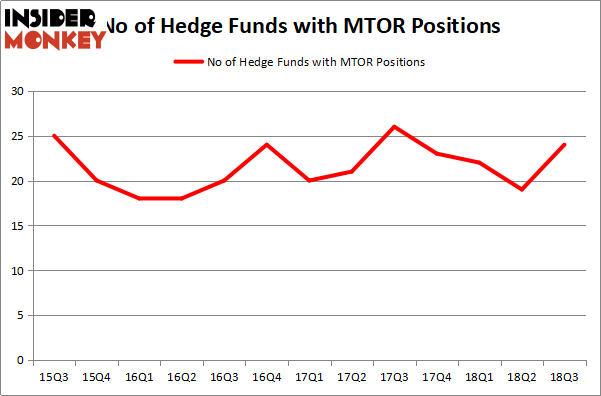 The largest stake in Meritor Inc (NYSE:MTOR) was held by Glenview Capital, which reported holding $162.5 million worth of stock at the end of September. It was followed by Royce & Associates with a $44.4 million position. Other investors bullish on the company included AQR Capital Management, Millennium Management, and Renaissance Technologies.

As you can see these stocks had an average of 22.25 hedge funds with bullish positions and the average amount invested in these stocks was $320 million. That figure was $322 million in MTOR’s case. Constellium NV (NYSE:CSTM) is the most popular stock in this table. On the other hand Mueller Industries, Inc. (NYSE:MLI) is the least popular one with only 15 bullish hedge fund positions. Meritor Inc (NYSE:MTOR) is not the most popular stock in this group but hedge fund interest is still above average. This is a slightly positive signal but we’d rather spend our time researching stocks that hedge funds are piling on. In this regard CSTM might be a better candidate to consider a long position.