A whopping number of 13F filings filed with U.S. Securities and Exchange Commission has been processed by Insider Monkey so that individual investors can look at the overall hedge fund sentiment towards the stocks included in their watchlists. These freshly-submitted public filings disclose money managers’ equity positions as of the end of the three-month period that ended September 30, so let’s proceed with the discussion of the hedge fund sentiment on Medtronic, Inc. (NYSE:MDT).

Is Medtronic, Inc. (NYSE:MDT) a buy here? The smart money is becoming more confident. The number of long hedge fund positions advanced by 18 in recent months. Our calculations also showed that MDT isn’t among the 30 most popular stocks among hedge funds. MDT was in 53 hedge funds’ portfolios at the end of September. There were 35 hedge funds in our database with MDT holdings at the end of the previous quarter.

How have hedgies been trading Medtronic, Inc. (NYSE:MDT)? 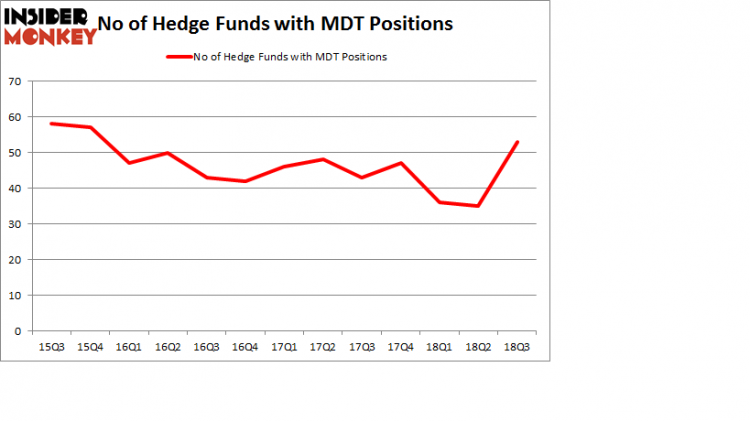 Among these funds, Diamond Hill Capital held the most valuable stake in Medtronic, Inc. (NYSE:MDT), which was worth $382.3 million at the end of the third quarter. On the second spot was Millennium Management which amassed $344.2 million worth of shares. Moreover, Citadel Investment Group, GLG Partners, and Renaissance Technologies were also bullish on Medtronic, Inc. (NYSE:MDT), allocating a large percentage of their portfolios to this stock.

With a general bullishness amongst the heavyweights, specific money managers were leading the bulls’ herd. Renaissance Technologies, managed by Jim Simons, initiated the largest position in Medtronic, Inc. (NYSE:MDT). Renaissance Technologies had $171.2 million invested in the company at the end of the quarter. Jeffrey Talpins’s Element Capital Management also initiated a $48.5 million position during the quarter. The other funds with brand new MDT positions are Stanley Druckenmiller’s Duquesne Capital, Matthew Tewksbury’s Stevens Capital Management, and Brad Dunkley and Blair Levinsky’s Waratah Capital Advisors.

As you can see these stocks had an average of 47.25 hedge funds with bullish positions and the average amount invested in these stocks was $2.85 billion. That figure was $2.51 billion in MDT’s case. Adobe Systems Incorporated (NASDAQ:ADBE) is the most popular stock in this table. On the other hand BHP Billiton Limited (NYSE:BHP) is the least popular one with only 19 bullish hedge fund positions. Medtronic, Inc. (NYSE:MDT) is not the most popular stock in this group but hedge fund interest is still above average. This is a slightly positive signal but we’d rather spend our time researching stocks that hedge funds are piling on. In this regard ADBE might be a better candidate to consider a long position.