Concerns over rising interest rates and expected further rate increases have hit several stocks hard since the end of the third quarter. NASDAQ and Russell 2000 indices are already in correction territory. More importantly, Russell 2000 ETF (IWM) underperformed the larger S&P 500 ETF (SPY) by about 4 percentage points in the first half of the fourth quarter. Hedge funds and institutional investors tracked by Insider Monkey usually invest a disproportionate amount of their portfolios in smaller cap stocks. We have been receiving indications that hedge funds were paring back their overall exposure and this is one of the factors behind the recent movements in major indices. In this article, we will take a closer look at hedge fund sentiment towards Libbey Inc. (NYSEAMEX:LBY).

Is Libbey Inc. (NYSEAMEX:LBY) going to take off soon? The smart money is becoming more confident. The number of long hedge fund positions increased by 1 recently. Our calculations also showed that lby isn’t among the 30 most popular stocks among hedge funds. 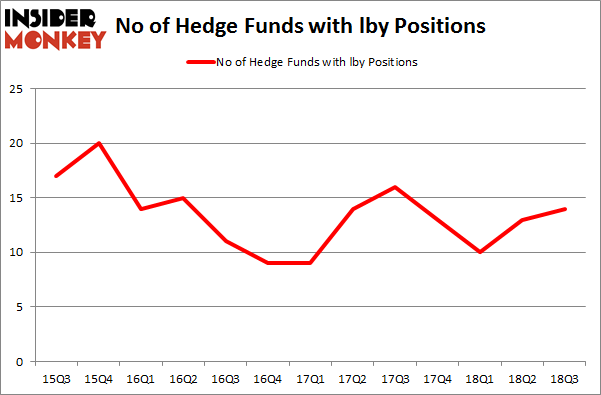 More specifically, Brigade Capital was the largest shareholder of Libbey Inc. (NYSEAMEX:LBY), with a stake worth $13.2 million reported as of the end of September. Trailing Brigade Capital was Royce & Associates, which amassed a stake valued at $12.2 million. Spitfire Capital, Wynnefield Capital, and Renaissance Technologies were also very fond of the stock, giving the stock large weights in their portfolios.

As industrywide interest jumped, some big names were leading the bulls’ herd. Two Sigma Advisors, managed by John Overdeck and David Siegel, initiated the most outsized position in Libbey Inc. (NYSEAMEX:LBY). Two Sigma Advisors had $0.2 million invested in the company at the end of the quarter. Matthew Hulsizer’s PEAK6 Capital Management also made a $0.2 million investment in the stock during the quarter. The only other fund with a new position in the stock is Mike Vranos’s Ellington.

As you can see these stocks had an average of 5.75 hedge funds with bullish positions and the average amount invested in these stocks was $41 million. That figure was $57 million in LBY’s case. Northwest Pipe Company (NASDAQ:NWPX) is the most popular stock in this table. On the other hand Northeast Bancorp (NASDAQ:NBN) is the least popular one with only 4 bullish hedge fund positions. Compared to these stocks Libbey Inc. (NYSE:LBY) is more popular among hedge funds. Considering that hedge funds are fond of this stock in relation to its market cap peers, it may be a good idea to analyze it in detail and potentially include it in your portfolio.