A whopping number of 13F filings filed with U.S. Securities and Exchange Commission has been processed by Insider Monkey so that individual investors can look at the overall hedge fund sentiment towards the stocks included in their watchlists. These freshly-submitted public filings disclose money managers’ equity positions as of the end of the three-month period that ended September 30, so let’s proceed with the discussion of the hedge fund sentiment on Kosmos Energy Ltd (NYSE:KOS).

Kosmos Energy Ltd (NYSE:KOS) investors should pay attention to an increase in hedge fund interest of late. KOS was in 18 hedge funds’ portfolios at the end of the third quarter of 2018. There were 15 hedge funds in our database with KOS holdings at the end of the previous quarter. Our calculations also showed that KOS isn’t among the 30 most popular stocks among hedge funds.

In the eyes of most shareholders, hedge funds are assumed to be slow, old investment tools of yesteryear. While there are greater than 8,000 funds in operation at the moment, We hone in on the aristocrats of this club, about 700 funds. These hedge fund managers administer most of the hedge fund industry’s total capital, and by paying attention to their first-class equity investments, Insider Monkey has figured out a number of investment strategies that have historically outperformed the market. Insider Monkey’s flagship hedge fund strategy outperformed the S&P 500 index by 6 percentage points a year since its inception in May 2014 through early November 2018. We were able to generate large returns even by identifying short candidates. Our portfolio of short stocks lost 24% since February 2017 (through December 3rd) even though the market was up nearly 23% during the same period. We just shared a list of 11 short targets in our latest quarterly update.

What have hedge funds been doing with Kosmos Energy Ltd (NYSE:KOS)?

At Q3’s end, a total of 18 of the hedge funds tracked by Insider Monkey held long positions in this stock, a change of 20% from the previous quarter. Below, you can check out the change in hedge fund sentiment towards KOS over the last 13 quarters. So, let’s examine which hedge funds were among the top holders of the stock and which hedge funds were making big moves. 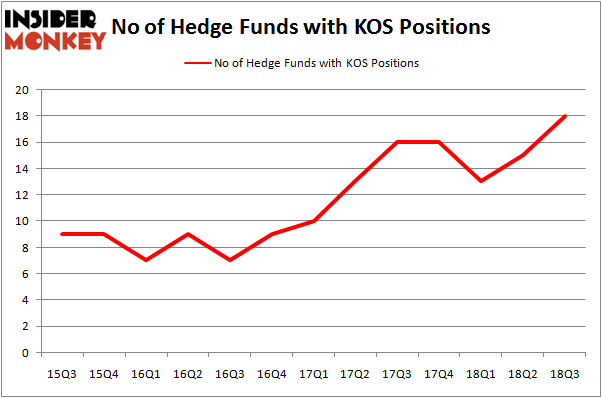 The largest stake in Kosmos Energy Ltd (NYSE:KOS) was held by SailingStone Capital Partners, which reported holding $112.8 million worth of stock at the end of September. It was followed by Millennium Management with a $22.3 million position. Other investors bullish on the company included Citadel Investment Group, Arosa Capital Management, and Encompass Capital Advisors.

As one would reasonably expect, key hedge funds have been driving this bullishness. Diametric Capital, managed by Nick Thakore, created the most outsized position in Kosmos Energy Ltd (NYSE:KOS). Diametric Capital had $0.9 million invested in the company at the end of the quarter. Gavin Saitowitz and Cisco J. del Valle’s Springbok Capital also made a $0.4 million investment in the stock during the quarter. The other funds with new positions in the stock are Dmitry Balyasny’s Balyasny Asset Management and Benjamin A. Smith’s Laurion Capital Management.

As you can see these stocks had an average of 19.5 hedge funds with bullish positions and the average amount invested in these stocks was $327 million. That figure was $200 million in KOS’s case. International Game Technology PLC (NYSE:IGT) is the most popular stock in this table. On the other hand Apple Hospitality REIT Inc (NYSE:APLE) is the least popular one with only 10 bullish hedge fund positions. Kosmos Energy Ltd (NYSE:KOS) is not the least popular stock in this group but hedge fund interest is still below average. This is a slightly negative signal and we’d rather spend our time researching stocks that hedge funds are piling on. In this regard IGT might be a better candidate to consider a long position.