The latest 13F reporting period has come and gone, and Insider Monkey is again at the forefront when it comes to making use of this gold mine of data. We have processed the filings of the more than 700 world-class investment firms that we track and now have access to the collective wisdom contained in these filings, which are based on their September 30 holdings, data that is available nowhere else. Should you consider Kite Realty Group Trust (NYSE:KRG) for your portfolio? We’ll look to this invaluable collective wisdom for the answer.

Kite Realty Group Trust (NYSE:KRG) has experienced an increase in support from the world’s most elite money managers in recent months. KRG was in 13 hedge funds’ portfolios at the end of September. There were 12 hedge funds in our database with KRG positions at the end of the previous quarter. Our calculations also showed that krg isn’t among the 30 most popular stocks among hedge funds.

How have hedgies been trading Kite Realty Group Trust (NYSE:KRG)?

At the end of the third quarter, a total of 13 of the hedge funds tracked by Insider Monkey were long this stock, a change of 8% from the second quarter of 2018. Below, you can check out the change in hedge fund sentiment towards KRG over the last 13 quarters. With hedgies’ capital changing hands, there exists a few notable hedge fund managers who were increasing their holdings considerably (or already accumulated large positions). 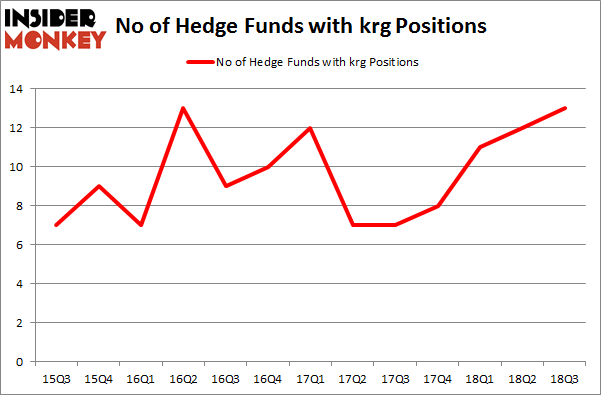 More specifically, Renaissance Technologies was the largest shareholder of Kite Realty Group Trust (NYSE:KRG), with a stake worth $13.5 million reported as of the end of September. Trailing Renaissance Technologies was GLG Partners, which amassed a stake valued at $7.5 million. Millennium Management, Citadel Investment Group, and Royce & Associates were also very fond of the stock, giving the stock large weights in their portfolios.

As industrywide interest jumped, some big names were leading the bulls’ herd. Arrowstreet Capital, managed by Peter Rathjens, Bruce Clarke and John Campbell, created the biggest position in Kite Realty Group Trust (NYSE:KRG). Arrowstreet Capital had $1 million invested in the company at the end of the quarter. Jeffrey Pierce’s Snow Park Capital Partners also initiated a $0.5 million position during the quarter. The only other fund with a brand new KRG position is Paul Tudor Jones’s Tudor Investment Corp.

As you can see these stocks had an average of 16.75 hedge funds with bullish positions and the average amount invested in these stocks was $168 million. That figure was $33 million in KRG’s case. The Liberty Braves Group (NASDAQ:BATRK) is the most popular stock in this table. On the other hand The Liberty Braves Group (NASDAQ:BATRA) is the least popular one with only 8 bullish hedge fund positions. Kite Realty Group Trust (NYSE:KRG) is not the least popular stock in this group but hedge fund interest is still below average. This is a slightly negative signal and we’d rather spend our time researching stocks that hedge funds are piling on. In this regard BATRK might be a better candidate to consider a long position.