Looking for stocks with high upside potential? Just follow the big players within the hedge fund industry. Why should you do so? Let’s take a brief look at what statistics have to say about hedge funds’ stock picking abilities to illustrate. The Standard and Poor’s 500 Index returned approximately 5.7% in the 12 months ending October 26 (including dividend payments). Conversely, hedge funds’ 30 preferred S&P 500 stocks (as of June 2014) generated a return of 15.1% during the same 12-month period, with 53% of these stock picks outperforming the broader market benchmark. Coincidence? It might happen to be so, but it is unlikely. Our research covering the last 18 years indicates that hedge funds’ stock picks generate superior risk-adjusted returns. That’s why we believe it is wise to check hedge fund activity before you invest your time or your savings on a stock like iRhythm Technologies, Inc. (NASDAQ:IRTC).

Is iRhythm Technologies, Inc. (NASDAQ:IRTC) a first-rate investment now? Investors who are in the know are betting on the stock. The number of long hedge fund bets went up by 5 lately. Our calculations also showed that IRTC isn’t among the 30 most popular stocks among hedge funds.

At the end of the third quarter, a total of 23 of the hedge funds tracked by Insider Monkey were long this stock, a change of 28% from the previous quarter. On the other hand, there were a total of 18 hedge funds with a bullish position in IRTC at the beginning of this year. With hedgies’ sentiment swirling, there exists a few noteworthy hedge fund managers who were adding to their stakes meaningfully (or already accumulated large positions). 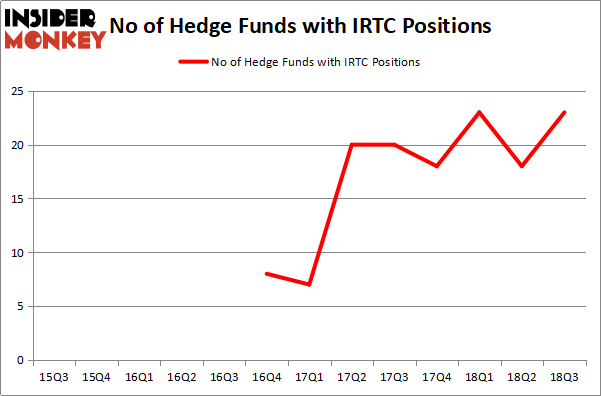 The largest stake in iRhythm Technologies, Inc. (NASDAQ:IRTC) was held by Millennium Management, which reported holding $70.8 million worth of stock at the end of September. It was followed by Rock Springs Capital Management with a $45.4 million position. Other investors bullish on the company included Citadel Investment Group, Driehaus Capital, and Partner Fund Management.

With a general bullishness amongst the heavyweights, specific money managers have been driving this bullishness. Balyasny Asset Management, managed by Dmitry Balyasny, established the most valuable call position in iRhythm Technologies, Inc. (NASDAQ:IRTC). Balyasny Asset Management had $9.3 million invested in the company at the end of the quarter. Noam Gottesman’s GLG Partners also made a $3 million investment in the stock during the quarter. The other funds with new positions in the stock are Peter Muller’s PDT Partners, David Costen Haley’s HBK Investments, and Michael Platt and William Reeves’s BlueCrest Capital Mgmt..

As you can see these stocks had an average of 16.75 hedge funds with bullish positions and the average amount invested in these stocks was $268 million. That figure was $305 million in IRTC’s case. Cott Corporation (NYSE:COT) is the most popular stock in this table. On the other hand American States Water Co (NYSE:AWR) is the least popular one with only 12 bullish hedge fund positions. iRhythm Technologies, Inc. (NASDAQ:IRTC) is not the most popular stock in this group but hedge fund interest is still above average. This is a slightly positive signal but we’d rather spend our time researching stocks that hedge funds are piling on. In this regard COT might be a better candidate to consider a long position.