Is HDFC Bank Limited (NYSE:HDB) a splendid investment right now? Investors who are in the know are buying. The number of long hedge fund positions rose by 3 lately. Our calculations also showed that HDB isn’t among the 30 most popular stocks among hedge funds.

At the moment there are a multitude of indicators investors use to evaluate their holdings. Two of the most underrated indicators are hedge fund and insider trading interest. Our experts have shown that, historically, those who follow the top picks of the best investment managers can beat the broader indices by a superb amount (see the details here).

What have hedge funds been doing with HDFC Bank Limited (NYSE:HDB)?

At the end of the third quarter, a total of 27 of the hedge funds tracked by Insider Monkey held long positions in this stock, a change of 13% from the second quarter of 2018. By comparison, 24 hedge funds held shares or bullish call options in HDB heading into this year. So, let’s review which hedge funds were among the top holders of the stock and which hedge funds were making big moves. 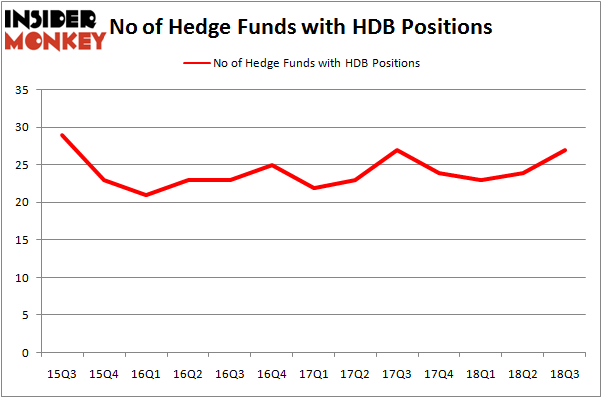 The largest stake in HDFC Bank Limited (NYSE:HDB) was held by Fisher Asset Management, which reported holding $413.4 million worth of stock at the end of September. It was followed by D E Shaw with a $124 million position. Other investors bullish on the company included Two Creeks Capital Management, Viking Global, and Driehaus Capital.

Let’s now take a look at hedge fund activity in other stocks – not necessarily in the same industry as HDFC Bank Limited (NYSE:HDB) but similarly valued. We will take a look at Twenty-First Century Fox Inc (NASDAQ:FOX), The Goldman Sachs Group, Inc. (NYSE:GS), Schlumberger Limited. (NYSE:SLB), and Morgan Stanley (NYSE:MS). This group of stocks’ market valuations are closest to HDB’s market valuation.

View table here if you experience formatting issues.
As you can see these stocks had an average of 53 hedge funds with bullish positions and the average amount invested in these stocks was $4.59 billion. That figure was $990 million in HDB’s case. The Goldman Sachs Group, Inc. (NYSE:GS) is the most popular stock in this table. On the other hand Twenty-First Century Fox Inc (NASDAQ:FOX) is the least popular one with only 49 bullish hedge fund positions. Compared to these stocks HDFC Bank Limited (NYSE:HDB) is even less popular than FOX. Considering that hedge funds aren’t fond of this stock in relation to other companies analyzed in this article, it may be a good idea to analyze it in detail and understand why the smart money isn’t behind this stock. This isn’t necessarily bad news. Although it is possible that hedge funds may think the stock is overpriced and view the stock as a short candidate, they may not be very familiar with the bullish thesis. In either case more research is warranted.