A whopping number of 13F filings filed with U.S. Securities and Exchange Commission has been processed by Insider Monkey so that individual investors can look at the overall hedge fund sentiment towards the stocks included in their watchlists. These freshly-submitted public filings disclose money managers’ equity positions as of the end of the three-month period that ended September 30, so let’s proceed with the discussion of the hedge fund sentiment on Galapagos NV (ADR) (NASDAQ:GLPG).

Is Galapagos NV (ADR) (NASDAQ:GLPG) the right pick for your portfolio? Prominent investors are indeed taking a bullish view. The number of bullish hedge fund bets that are revealed through the 13F filings experienced an increase of 2 recently. In this way, there were 16 hedge funds in our database with GLPG positions at the end of the last quarter. At the end of this article we will also compare GLPG to other stocks including William Lyon Homes (NYSE:WLH), Clean Energy Fuels Corp (NASDAQ:CLNE), and Francesca’s Holdings Corp (NASDAQ:FRAN) to get a better sense of its popularity.

How have hedgies been trading Galapagos NV (ADR) (NASDAQ:GLPG)?

At Q3’s end, a total of 16 of the hedge funds tracked by Insider Monkey were bullish on this stock, a gain of 14% from the second quarter of 2016. The graph below displays the number of hedge funds with bullish position in GLPG over the last 5 quarters. With hedge funds’ sentiment swirling, there exists an “upper tier” of key hedge fund managers who were upping their holdings substantially (or already accumulated large positions). 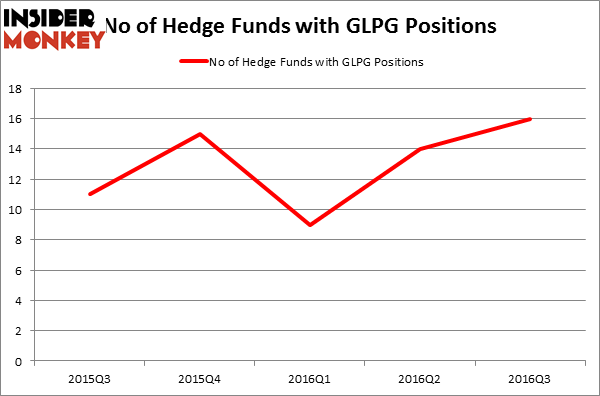 According to Insider Monkey’s hedge fund database, Oleg Nodelman’s EcoR1 Capital has the biggest position in Galapagos NV (ADR) (NASDAQ:GLPG), worth close to $32.4 million, corresponding to 9.9% of its total 13F portfolio. Coming in second is OrbiMed Advisors, led by Samuel Isaly, holding a $29.6 million position. Some other hedge funds and institutional investors that hold long positions comprise James E. Flynn’s Deerfield Management, Bihua Chen’s Cormorant Asset Management and Julian Baker and Felix Baker’s Baker Bros. Advisors. We should note that none of these hedge funds are among our list of the 100 best performing hedge funds which is based on the performance of their 13F long positions in non-microcap stocks.