Is Fortinet Inc (NASDAQ:FTNT) a good investment right now? We check hedge fund and billionaire investor sentiment before delving into hours of research. Hedge funds spend millions of dollars on Ivy League graduates, expert networks, and get tips from industry insiders. They sometimes fail miserably but historically their consensus stock picks outperformed the market after adjusting for known risk factors.

Fortinet Inc (NASDAQ:FTNT) has experienced an increase in hedge fund sentiment lately. FTNT was in 28 hedge funds’ portfolios at the end of the third quarter of 2018. There were 26 hedge funds in our database with FTNT positions at the end of the previous quarter. Our calculations also showed that FTNT isn’t among the 30 most popular stocks among hedge funds.

What does the smart money think about Fortinet Inc (NASDAQ:FTNT)?

At the end of the third quarter, a total of 28 of the hedge funds tracked by Insider Monkey were long this stock, a change of 8% from one quarter earlier. Below, you can check out the change in hedge fund sentiment towards FTNT over the last 13 quarters. So, let’s see which hedge funds were among the top holders of the stock and which hedge funds were making big moves. 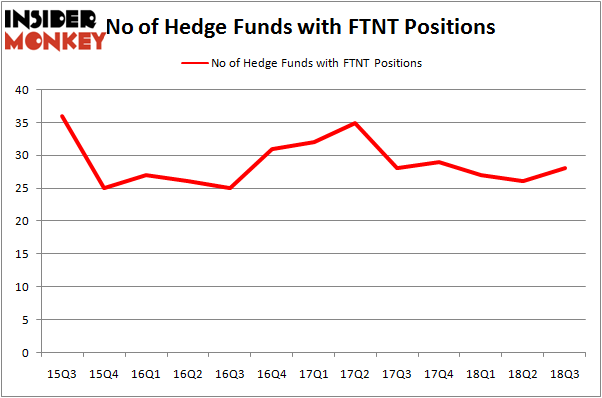 According to Insider Monkey’s hedge fund database, Jim Simons’s Renaissance Technologies has the number one position in Fortinet Inc (NASDAQ:FTNT), worth close to $310.1 million, amounting to 0.3% of its total 13F portfolio. The second largest stake is held by Arrowstreet Capital, led by Peter Rathjens, Bruce Clarke and John Campbell, holding a $190.7 million position; the fund has 0.4% of its 13F portfolio invested in the stock. Some other professional money managers that are bullish encompass John Overdeck and David Siegel’s Two Sigma Advisors, Josh Resnick’s Jericho Capital Asset Management and Cliff Asness’s AQR Capital Management.

As you can see these stocks had an average of 28.25 hedge funds with bullish positions and the average amount invested in these stocks was $881 million. That figure was $1,047 million in FTNT’s case. Comerica Incorporated (NYSE:CMA) is the most popular stock in this table. On the other hand Magellan Midstream Partners, L.P. (NYSE:MMP) is the least popular one with only 14 bullish hedge fund positions. Fortinet Inc (NASDAQ:FTNT) is not the least popular stock in this group but hedge fund interest is still below average. This is a slightly negative signal and we’d rather spend our time researching stocks that hedge funds are piling on. In this regard CMA might be a better candidate to consider a long position.