We at Insider Monkey have gone over 700 13F filings that hedge funds and prominent investors are required to file by the SEC The 13F filings show the funds’ and investors’ portfolio positions as of September 30th. In this article, we look at what those funds think of Emcor Group Inc (NYSE:EME) based on that data.

Emcor Group Inc (NYSE:EME) was in 20 hedge funds’ portfolios at the end of the third quarter of 2018. EME investors should be aware of an increase in enthusiasm from smart money of late. There were 17 hedge funds in our database with EME positions at the end of the previous quarter. Our calculations also showed that EME isn’t among the 30 most popular stocks among hedge funds.

What does the smart money think about Emcor Group Inc (NYSE:EME)?

At Q3’s end, a total of 20 of the hedge funds tracked by Insider Monkey were long this stock, a change of 18% from the second quarter of 2018. By comparison, 24 hedge funds held shares or bullish call options in EME heading into this year. With hedgies’ sentiment swirling, there exists a select group of noteworthy hedge fund managers who were adding to their stakes considerably (or already accumulated large positions). 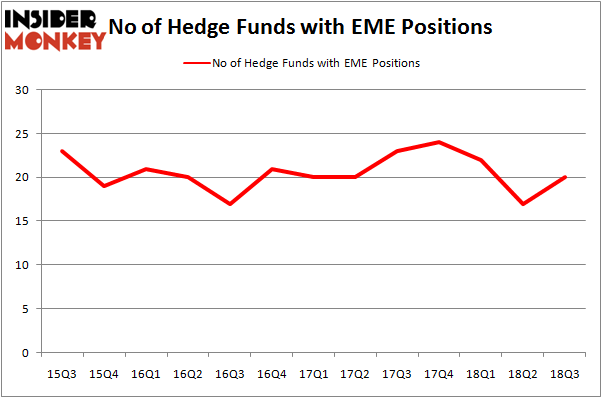 The largest stake in Emcor Group Inc (NYSE:EME) was held by AQR Capital Management, which reported holding $82.7 million worth of stock at the end of September. It was followed by GLG Partners with a $27 million position. Other investors bullish on the company included Adage Capital Management, Renaissance Technologies, and Impax Asset Management.

Consequently, key money managers have jumped into Emcor Group Inc (NYSE:EME) headfirst. Impax Asset Management, managed by Ian Simm, created the most valuable position in Emcor Group Inc (NYSE:EME). Impax Asset Management had $13.2 million invested in the company at the end of the quarter. Matthew Tewksbury’s Stevens Capital Management also initiated a $1.4 million position during the quarter. The other funds with new positions in the stock are Michael Platt and William Reeves’s BlueCrest Capital Mgmt. and Thomas Bailard’s Bailard Inc.

As you can see these stocks had an average of 20.75 hedge funds with bullish positions and the average amount invested in these stocks was $382 million. That figure was $231 million in EME’s case. Essent Group Ltd (NYSE:ESNT) is the most popular stock in this table. On the other hand Proto Labs Inc (NYSE:PRLB) is the least popular one with only 5 bullish hedge fund positions. Emcor Group Inc (NYSE:EME) is not the least popular stock in this group but hedge fund interest is still below average. This is a slightly negative signal and we’d rather spend our time researching stocks that hedge funds are piling on. In this regard ESNT might be a better candidate to consider a long position.