Investing in small cap stocks has historically been a way to outperform the market, as small cap companies typically grow faster on average than the blue chips. That outperformance comes with a price, however, as there are occasional periods of higher volatility. The last 8 months is one of those periods, as the Russell 2000 ETF (IWM) has underperformed the larger S&P 500 ETF (SPY) by nearly 9 percentage points. Given that the funds we track tend to have a disproportionate amount of their portfolios in smaller cap stocks, they have seen some volatility in their portfolios too. Actually their moves are potentially one of the factors that contributed to this volatility. In this article, we use our extensive database of hedge fund holdings to find out what the smart money thinks of Dunkin Brands Group Inc (NASDAQ:DNKN).

Dunkin Brands Group Inc (NASDAQ:DNKN) has seen an increase in enthusiasm from smart money lately. Our calculations also showed that DNKN isn’t among the 30 most popular stocks among hedge funds.

In the 21st century investor’s toolkit there are a multitude of gauges market participants use to appraise stocks. A duo of the less known gauges are hedge fund and insider trading interest. Our researchers have shown that, historically, those who follow the top picks of the top investment managers can outclass the market by a solid amount (see the details here). 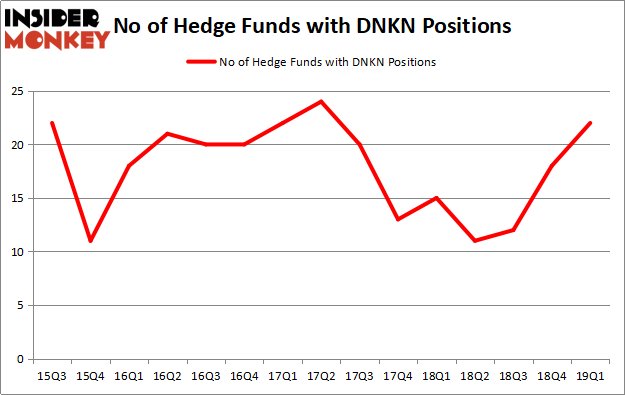 The largest stake in Dunkin Brands Group Inc (NASDAQ:DNKN) was held by Marshall Wace LLP, which reported holding $49.1 million worth of stock at the end of March. It was followed by Millennium Management with a $34.9 million position. Other investors bullish on the company included Citadel Investment Group, Maverick Capital, and Two Sigma Advisors.

As you can see these stocks had an average of 11.5 hedge funds with bullish positions and the average amount invested in these stocks was $118 million. That figure was $186 million in DNKN’s case. The Chemours Company (NYSE:CC) is the most popular stock in this table. On the other hand Enable Midstream Partners LP (NYSE:ENBL) is the least popular one with only 5 bullish hedge fund positions. Dunkin Brands Group Inc (NASDAQ:DNKN) is not the most popular stock in this group but hedge fund interest is still above average. Our calculations showed that top 20 most popular stocks among hedge funds returned 6.2% in Q2 through June 19th and outperformed the S&P 500 ETF (SPY) by nearly 3 percentage points. Hedge funds were also right about betting on DNKN as the stock returned 6.9% during the same period and outperformed the market by an even larger margin. Hedge funds were rewarded for their relative bullishness.

Is Ardmore Shipping Corp (ASC) A Good Stock To Buy?
Monthly Newsletter Strategy
Download a free copy of our newsletter and see the details inside!
Hedge Fund Resource Center
Related News
Dunkin Brands Group Inc (DNKN): Hedge Funds Are Snapping Up Again Is Dunkin Brands Group Inc (DNKN) A Good Stock To Buy? 11 Fastest Growing Franchises in the US in 2018 11 Biggest Fast Food Franchises In The World In 2017 Top 10 Coffee Brands in America 11 Most Successful Fast Food Chains In The World 16 Healthiest Fast Food Menu Items and Restaurants: Should You Invest Healthful? How to Choose the Best Canadian Credit Card in 4 Simple Steps 25 Gambling Stocks Hedge Funds Are Crazy About in 2019 11 Easiest Orthodontic Residency Programs to Get Into
Billionaire Hedge Funds