Does Coca-Cola European Partners plc (NYSE:CCE) represent a good buying opportunity at the moment? Let’s briefly check the hedge fund interest towards the company. Hedge fund firms constantly search out bright intellectuals and highly-experienced employees and throw away millions of dollars on research activities, so it is no wonder why they tend to generate millions in profits each year. It is also true that some hedge fund players fail unconceivably on some occasions, but their stock picks have been generating superior risk-adjusted returns on average over the years.

Coca-Cola European Partners plc (NYSE:CCE) was in 23 hedge funds’ portfolios at the end of the third quarter of 2018. CCE has experienced an increase in activity from the world’s largest hedge funds lately. There were 22 hedge funds in our database with CCE holdings at the end of the previous quarter. Our calculations also showed that CCE isn’t among the 30 most popular stocks among hedge funds.

In the eyes of most traders, hedge funds are perceived as unimportant, outdated investment vehicles of the past. While there are more than 8,000 funds with their doors open at present, Our researchers hone in on the moguls of this club, approximately 700 funds. Most estimates calculate that this group of people control the majority of all hedge funds’ total capital, and by tracking their first-class equity investments, Insider Monkey has uncovered many investment strategies that have historically outpaced the broader indices. Insider Monkey’s flagship hedge fund strategy defeated the S&P 500 index by 6 percentage points per annum since its inception in May 2014 through early November 2018. We were able to generate large returns even by identifying short candidates. Our portfolio of short stocks lost 24% since February 2017 (through December 3rd) even though the market was up nearly 23% during the same period. We just shared a list of 11 short targets in our latest quarterly update.

Heading into the fourth quarter of 2018, a total of 23 of the hedge funds tracked by Insider Monkey held long positions in this stock, a change of 5% from one quarter earlier. The graph below displays the number of hedge funds with bullish position in CCE over the last 13 quarters. So, let’s examine which hedge funds were among the top holders of the stock and which hedge funds were making big moves. 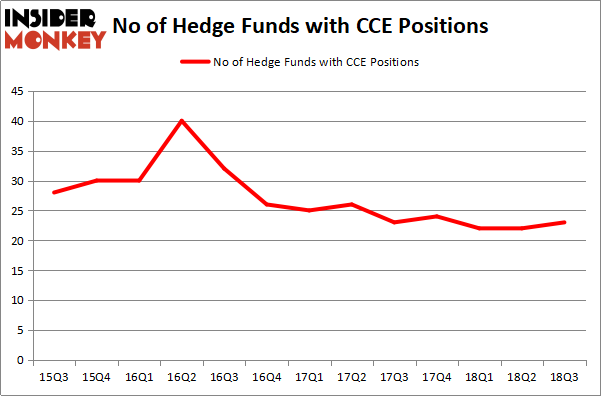 Of the funds tracked by Insider Monkey, Israel Englander’s Millennium Management has the largest position in Coca-Cola European Partners plc (NYSE:CCE), worth close to $107.6 million, amounting to 0.1% of its total 13F portfolio. Sitting at the No. 2 spot is Jonathon Jacobson of Highfields Capital Management, with a $102.4 million position; 2.1% of its 13F portfolio is allocated to the company. Some other peers that hold long positions comprise Daniel S. Och’s OZ Management, Ken Griffin’s Citadel Investment Group and Dmitry Balyasny’s Balyasny Asset Management.

Consequently, some big names have been driving this bullishness. Soros Fund Management, managed by George Soros, created the biggest position in Coca-Cola European Partners plc (NYSE:CCE). Soros Fund Management had $13.6 million invested in the company at the end of the quarter. John Overdeck and David Siegel’s Two Sigma Advisors also made a $6.7 million investment in the stock during the quarter. The other funds with new positions in the stock are Jeffrey Talpins’s Element Capital Management, Paul Marshall and Ian Wace’s Marshall Wace LLP, and Mike Vranos’s Ellington.

As you can see these stocks had an average of 21.5 hedge funds with bullish positions and the average amount invested in these stocks was $1.08 billion. That figure was $477 million in CCE’s case. Teva Pharmaceutical Industries Limited (NYSE:TEVA) is the most popular stock in this table. On the other hand TELUS Corporation (NYSE:TU) is the least popular one with only 12 bullish hedge fund positions. Coca-Cola European Partners plc (NYSE:CCE) is not the most popular stock in this group but hedge fund interest is still above average. This is a slightly positive signal but we’d rather spend our time researching stocks that hedge funds are piling on. In this regard TEVA might be a better candidate to consider a long position.