Insider Monkey finished processing more than 700 13F filings made by hedge funds and prominent investors. These filings show these funds’ portfolio positions as of September 30th. What do these smart investors think about CarGurus, Inc. (NASDAQ:CARG)?

CarGurus, Inc. (NASDAQ:CARG) investors should pay attention to an increase in support from the world’s most elite money managers of late. CARG was in 17 hedge funds’ portfolios at the end of the third quarter of 2018. There were 11 hedge funds in our database with CARG positions at the end of the previous quarter. Our calculations also showed that CARG isn’t among the 30 most popular stocks among hedge funds.

We’re going to take a look at the latest hedge fund action regarding CarGurus, Inc. (NASDAQ:CARG).

How have hedgies been trading CarGurus, Inc. (NASDAQ:CARG)?

At Q3’s end, a total of 17 of the hedge funds tracked by Insider Monkey held long positions in this stock, a change of 55% from the second quarter of 2018. By comparison, 10 hedge funds held shares or bullish call options in CARG heading into this year. With the smart money’s sentiment swirling, there exists a select group of key hedge fund managers who were boosting their holdings substantially (or already accumulated large positions). 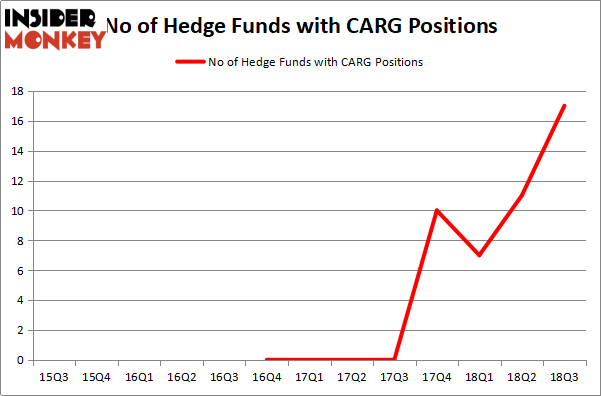 More specifically, Matrix Capital Management was the largest shareholder of CarGurus, Inc. (NASDAQ:CARG), with a stake worth $267.4 million reported as of the end of September. Trailing Matrix Capital Management was Hound Partners, which amassed a stake valued at $190.8 million. Cat Rock Capital, Two Sigma Advisors, and Renaissance Technologies were also very fond of the stock, giving the stock large weights in their portfolios.

With a general bullishness amongst the heavyweights, specific money managers were breaking ground themselves. Hound Partners, managed by Jonathan Auerbach, initiated the most valuable position in CarGurus, Inc. (NASDAQ:CARG). Hound Partners had $190.8 million invested in the company at the end of the quarter. Jim Simons’s Renaissance Technologies also made a $33.5 million investment in the stock during the quarter. The following funds were also among the new CARG investors: James Crichton’s Hitchwood Capital Management, Richard Driehaus’s Driehaus Capital, and David Costen Haley’s HBK Investments.

As you can see these stocks had an average of 25.25 hedge funds with bullish positions and the average amount invested in these stocks was $501 million. That figure was $792 million in CARG’s case. Integrated Device Technology, Inc. (NASDAQ:IDTI) is the most popular stock in this table. On the other hand YPF Sociedad Anonima (NYSE:YPF) is the least popular one with only 17 bullish hedge fund positions. Compared to these stocks CarGurus, Inc. (NASDAQ:CARG) is even less popular than YPF. Considering that hedge funds aren’t fond of this stock in relation to other companies analyzed in this article, it may be a good idea to analyze it in detail and understand why the smart money isn’t behind this stock. This isn’t necessarily bad news. Although it is possible that hedge funds may think the stock is overpriced and view the stock as a short candidate, they may not be very familiar with the bullish thesis. In either case more research is warranted.