The government requires hedge funds and wealthy investors with over a certain portfolio size to file a report that shows their positions at the end of every quarter. Even though it isn’t the intention, these filings level the playing field for ordinary investors. The latest round of 13F filings disclosed the funds’ positions on September 30. We at Insider Monkey have made an extensive database of more than 700 of those elite funds and prominent investors’ filings. In this article, we analyze how these elite funds and prominent investors traded Cantel Medical Corp. (NYSE:CMD) based on those filings.

Cantel Medical Corp. (NYSE:CMD) was in 23 hedge funds’ portfolios at the end of the third quarter of 2018. CMD shareholders have witnessed an increase in support from the world’s most elite money managers recently. There were 21 hedge funds in our database with CMD holdings at the end of the previous quarter. Our calculations also showed that CMD isn’t among the 30 most popular stocks among hedge funds.

What does the smart money think about Cantel Medical Corp. (NYSE:CMD)? 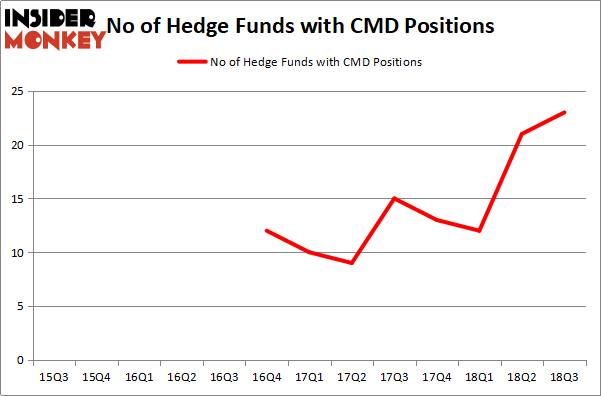 Among these funds, Diker Management held the most valuable stake in Cantel Medical Corp. (NYSE:CMD), which was worth $127.3 million at the end of the third quarter. On the second spot was Impax Asset Management which amassed $21.4 million worth of shares. Moreover, Millennium Management, Marshall Wace LLP, and GLG Partners were also bullish on Cantel Medical Corp. (NYSE:CMD), allocating a large percentage of their portfolios to this stock.

Now, specific money managers have been driving this bullishness. Impax Asset Management, managed by Ian Simm, assembled the most valuable position in Cantel Medical Corp. (NYSE:CMD). Impax Asset Management had $21.4 million invested in the company at the end of the quarter. Paul Marshall and Ian Wace’s Marshall Wace LLP also made a $11.6 million investment in the stock during the quarter. The other funds with brand new CMD positions are Jim Simons’s Renaissance Technologies, Israel Englander’s Millennium Management, and Brandon Haley’s Holocene Advisors.

As you can see these stocks had an average of 21.25 hedge funds with bullish positions and the average amount invested in these stocks was $235 million. That figure was $233 million in CMD’s case. Extended Stay America Inc (NASDAQ:STAY) is the most popular stock in this table. On the other hand 0 is the least popular one with only 12 bullish hedge fund positions. Cantel Medical Corp. (NYSE:CMD) is not the most popular stock in this group but hedge fund interest is still above average. This is a slightly positive signal but we’d rather spend our time researching stocks that hedge funds are piling on. In this regard STAY might be a better candidate to consider a long position.