At Insider Monkey, we track over 700 of the most successful hedge funds in the world and analyze their top stock picks so as to gain insight into their collective buying habits. Despite redemptions totaling about $67 billion this year, hedge funds’ assets under management have risen to $3.24 trillion thanks to gains of 5.44% this year. While hedge funds continue to underperform the market, we have found that they excel at picking stocks on the long side of their portfolios, while generally not faring as well with their other investments, which drags down their overall returns. For example, their top-30 mid-cap stock picks delivered 18% returns during the 12-month period ended November 21, 2016, while the S&P 500 Index posted gains of less than half that (7.6%). This is why we share the top picks and trends among the group of hedge funds that we follow with readers, and why in this article, we’ll see how they’ve recently traded Axis Capital Holdings Limited (NYSE:AXS).

Axis Capital Holdings Limited (NYSE:AXS) was in 13 hedge funds’ portfolios at the end of the third quarter of 2016. AXS investors should pay attention to an increase in activity from the world’s largest hedge funds of late. There were 11 hedge funds in our database with AXS holdings at the end of the previous quarter. At the end of this article we will also compare AXS to other stocks including People’s United Financial, Inc. (NASDAQ:PBCT), Toll Brothers Inc (NYSE:TOL), and Tesoro Logistics LP (NYSE:TLLP) to get a better sense of its popularity. 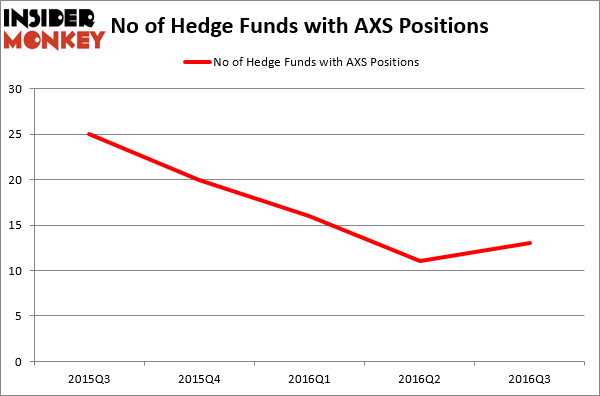 When looking at the institutional investors followed by Insider Monkey, Richard S. Pzena’s Pzena Investment Management has the number one position in Axis Capital Holdings Limited (NYSE:AXS), worth close to $265 million, accounting for 1.6% of its total 13F portfolio. On Pzena Investment Management’s heels is AQR Capital Management, led by Cliff Asness, holding a $96.3 million position. Other members of the smart money with similar optimism contain Renaissance Technologies,  one of the largest hedge funds in the world, D. E. Shaw’s D E Shaw and Dmitry Balyasny’s Balyasny Asset Management. We should note that none of these hedge funds are among our list of the 100 best performing hedge funds which is based on the performance of their 13F long positions in non-microcap stocks.