Avanos Medical, Inc. (NYSE:AVNS) has seen an increase in enthusiasm from smart money of late. AVNS was in 17 hedge funds’ portfolios at the end of September. There were 16 hedge funds in our database with AVNS holdings at the end of the previous quarter. Our calculations also showed that AVNS isn’t among the 30 most popular stocks among hedge funds.

In the 21st century investor’s toolkit there are numerous metrics stock traders have at their disposal to analyze publicly traded companies. Some of the most innovative metrics are hedge fund and insider trading sentiment. We have shown that, historically, those who follow the top picks of the best money managers can outpace the broader indices by a solid margin (see the details here).

What does the smart money think about Avanos Medical, Inc. (NYSE:AVNS)? 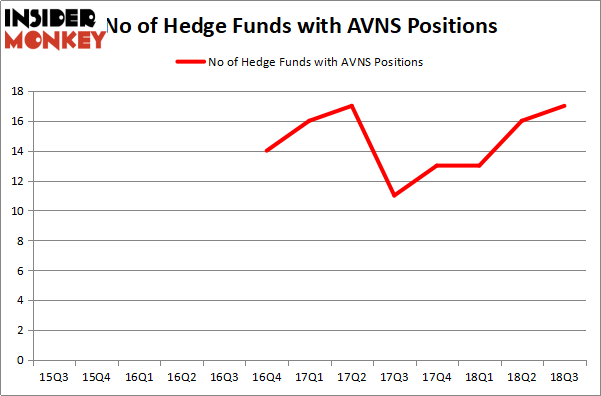 The largest stake in Avanos Medical, Inc. (NYSE:AVNS) was held by Select Equity Group, which reported holding $35.7 million worth of stock at the end of September. It was followed by Polar Capital with a $16.7 million position. Other investors bullish on the company included Gotham Asset Management, Renaissance Technologies, and Millennium Management.

As one would reasonably expect, some big names were breaking ground themselves. Select Equity Group, managed by Robert Joseph Caruso, assembled the most valuable position in Avanos Medical, Inc. (NYSE:AVNS). Select Equity Group had $35.7 million invested in the company at the end of the quarter. Brian Ashford-Russell and Tim Woolley’s Polar Capital also made a $16.7 million investment in the stock during the quarter. The other funds with brand new AVNS positions are Joel Greenblatt’s Gotham Asset Management, Jim Simons’s Renaissance Technologies, and Israel Englander’s Millennium Management.

As you can see these stocks had an average of 18 hedge funds with bullish positions and the average amount invested in these stocks was $200 million. That figure was $114 million in AVNS’s case. LHC Group, Inc. (NASDAQ:LHCG) is the most popular stock in this table. On the other hand BancorpSouth Bank (NYSE:BXS) is the least popular one with only 7 bullish hedge fund positions. Avanos Medical, Inc. (NYSE:AVNS) is not the least popular stock in this group but hedge fund interest is still below average. This is a slightly negative signal and we’d rather spend our time researching stocks that hedge funds are piling on. In this regard LHCG might be a better candidate to consider a long position.

Is Federal Signal Corporation (FSS) A Good Stock To Buy?
Monthly Newsletter Strategy
Download a free copy of our newsletter and see the details inside!
Hedge Fund Resource Center
Related News
11 Countries With The Worst Modern Music In The World The Top 5 Robo Advisor Apps of 2018 Five Reasons You Need a Day-Trading Mentor
Billionaire Hedge Funds