Concerns over rising interest rates and expected further rate increases have hit several stocks hard since the end of the third quarter. NASDAQ and Russell 2000 indices are already in correction territory. More importantly, Russell 2000 ETF (IWM) underperformed the larger S&P 500 ETF (SPY) by about 4 percentage points in the first half of the fourth quarter. Hedge funds and institutional investors tracked by Insider Monkey usually invest a disproportionate amount of their portfolios in smaller cap stocks. We have been receiving indications that hedge funds were paring back their overall exposure and this is one of the factors behind the recent movements in major indices. In this article, we will take a closer look at hedge fund sentiment towards Ascena Retail Group Inc (NASDAQ:ASNA).

Is Ascena Retail Group Inc (NASDAQ:ASNA) going to take off soon? Hedge funds are getting more optimistic. The number of long hedge fund positions advanced by 6 lately. Our calculations also showed that asna isn’t among the 30 most popular stocks among hedge funds. ASNA was in 21 hedge funds’ portfolios at the end of the third quarter of 2018. There were 15 hedge funds in our database with ASNA holdings at the end of the previous quarter.

In the eyes of most traders, hedge funds are seen as unimportant, old investment tools of yesteryear. While there are greater than 8,000 funds in operation at the moment, Our experts choose to focus on the masters of this club, approximately 700 funds. These investment experts control bulk of all hedge funds’ total asset base, and by tracking their highest performing picks, Insider Monkey has figured out a few investment strategies that have historically outpaced Mr. Market. Insider Monkey’s flagship hedge fund strategy exceeded the S&P 500 index by 6 percentage points annually since its inception in May 2014 through early November 2018. We were able to generate large returns even by identifying short candidates. Our portfolio of short stocks lost 24% since February 2017 (through December 3rd) even though the market was up nearly 23% during the same period. We just shared a list of 11 short targets in our latest quarterly update.

Heading into the fourth quarter of 2018, a total of 21 of the hedge funds tracked by Insider Monkey were bullish on this stock, a change of 40% from one quarter earlier. Below, you can check out the change in hedge fund sentiment towards ASNA over the last 13 quarters. So, let’s find out which hedge funds were among the top holders of the stock and which hedge funds were making big moves. 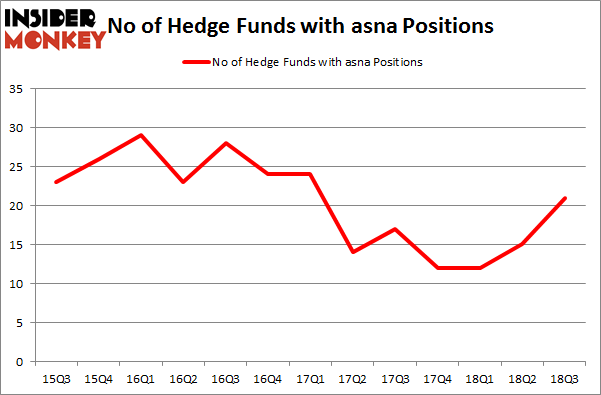 The largest stake in Ascena Retail Group Inc (NASDAQ:ASNA) was held by Stadium Capital Management, which reported holding $87.9 million worth of stock at the end of September. It was followed by Renaissance Technologies with a $33 million position. Other investors bullish on the company included Arrowstreet Capital, Royce & Associates, and Millennium Management.

Now, specific money managers have been driving this bullishness. Coatue Management, managed by Philippe Laffont, established the biggest position in Ascena Retail Group Inc (NASDAQ:ASNA). Coatue Management had $0.7 million invested in the company at the end of the quarter. D. E. Shaw’s D E Shaw also initiated a $0.3 million position during the quarter. The other funds with new positions in the stock are Mike Vranos’s Ellington, John Zaro’s Bourgeon Capital, and Guy Shahar’s DSAM Partners.

As you can see these stocks had an average of 12.5 hedge funds with bullish positions and the average amount invested in these stocks was $44 million. That figure was $147 million in ASNA’s case. Perficient, Inc. (NASDAQ:PRFT) is the most popular stock in this table. On the other hand Hersha Hospitality Trust (NYSE:HT) is the least popular one with only 8 bullish hedge fund positions. Compared to these stocks Ascena Retail Group Inc (NASDAQ:ASNA) is more popular among hedge funds. Considering that hedge funds are fond of this stock in relation to its market cap peers, it may be a good idea to analyze it in detail and potentially include it in your portfolio.