The Insider Monkey team has completed processing the quarterly 13F filings for the September quarter submitted by the hedge funds and other money managers included in our extensive database. Most hedge fund investors endured a torrid quarter, which certainly propelled them to adjust their equity holdings so as to maintain the desired risk profile. As a result, the relevancy of these public filings and their content is indisputable, as they may reveal numerous high-potential stocks. The following article will discuss the smart money sentiment towards ALLETE Inc (NYSE:ALE).

ALLETE Inc (NYSE:ALE) investors should be aware of an increase in hedge fund interest lately. Our calculations also showed that ale isn’t among the 30 most popular stocks among hedge funds.

At the moment there are numerous indicators market participants use to value their stock investments. A duo of the most underrated indicators are hedge fund and insider trading sentiment. Our researchers have shown that, historically, those who follow the best picks of the elite investment managers can outclass the market by a healthy margin (see the details here).

At Q3’s end, a total of 17 of the hedge funds tracked by Insider Monkey were long this stock, a change of 13% from the previous quarter. The graph below displays the number of hedge funds with bullish position in ALE over the last 13 quarters. With the smart money’s capital changing hands, there exists an “upper tier” of noteworthy hedge fund managers who were increasing their holdings considerably (or already accumulated large positions). 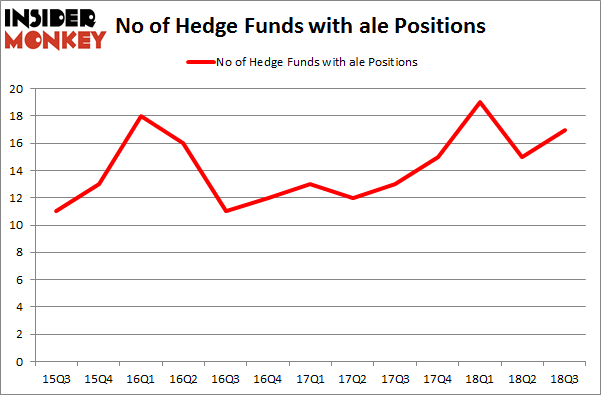 More specifically, Renaissance Technologies was the largest shareholder of ALLETE Inc (NYSE:ALE), with a stake worth $74 million reported as of the end of September. Trailing Renaissance Technologies was Polaris Capital Management, which amassed a stake valued at $45.9 million. GLG Partners, Royce & Associates, and Millennium Management were also very fond of the stock, giving the stock large weights in their portfolios.

As one would reasonably expect, specific money managers were leading the bulls’ herd. Covalis Capital, managed by ZilvinasáMecelis, established the most outsized position in ALLETE Inc (NYSE:ALE). Covalis Capital had $3.3 million invested in the company at the end of the quarter. Brandon Haley’s Holocene Advisors also initiated a $1.1 million position during the quarter. The other funds with brand new ALE positions are Peter Muller’s PDT Partners, David Costen Haley’s HBK Investments, and Michael Platt and William Reeves’s BlueCrest Capital Mgmt..

As you can see these stocks had an average of 15.25 hedge funds with bullish positions and the average amount invested in these stocks was $232 million. That figure was $178 million in ALE’s case. Cantel Medical Corp. (NYSE:CMD) is the most popular stock in this table. On the other hand Matador Resources Co (NYSE:MTDR) is the least popular one with only 10 bullish hedge fund positions. ALLETE Inc (NYSE:ALE) is not the most popular stock in this group but hedge fund interest is still above average. This is a slightly positive signal but we’d rather spend our time researching stocks that hedge funds are piling on. In this regard CMD might be a better candidate to consider a long position.