Hedge funds and large money managers usually invest with a focus on the long-term horizon and, therefore, short-lived dips on the charts usually don’t make them change their opinion towards a company. This time it may be different. During the first 6 weeks of the fourth quarter we observed increased volatility and small-cap stocks underperformed the market. Hedge fund investor letters indicated that they are cutting their overall exposure, closing out some positions and doubling down on others. Let’s take a look at the hedge fund sentiment towards Adient plc (NYSE:ADNT) to find out whether it was one of their high conviction long-term ideas.

After 4 straight quarters of bleeding hedge fund shareholders, there was a 12% rise on that front during Q3 for Adient plc (NYSE:ADNT). Nonetheless, there are 40% fewer hedge fund shareholders of the stock than there were in the middle of 2017. It’s hard to blame hedgies for bailing up to this point, as Adient shares have been decimated by 70% in 2018. The uptick in sentiment during Q3 looks like a good indicator that several funds believe shares have hit rock bottom. Anthony Bozza’s Lakewood Capital is one fund that hasn’t bailed on Adient, which was its top stock pick for several quarters in late-2016/early-2017. In its Q2 investor letter, it stated that the company’s $4 billion market cap (at the time, it’s now down to $2.33 billion) was far too low.

“After its recent decline, the company’s current market capitalization is just $4 billion (with moderate net debt, considering the cash in its China joint ventures), which strikes us as far too low for a company that produces around one-third of the world’s automotive seats (products facing no disintermediation or obsolescence risk). We continue to appreciate the turnaround in this business will take some time, but as these losses are reduced or eliminated, the company should restore its earnings power to over $10 per share. If the stock were to trade at just 10x this number, it would be worth double its current price,” Lakewood Capital’s Q2 letter stated.

In the 21st century investor’s toolkit there are plenty of formulas stock market investors can use to value stocks. Two of the most innovative formulas are hedge fund and insider trading sentiment. Our experts have shown that, historically, those who follow the best picks of the elite investment managers can outpace their index-focused peers by a very impressive amount (see the details here). 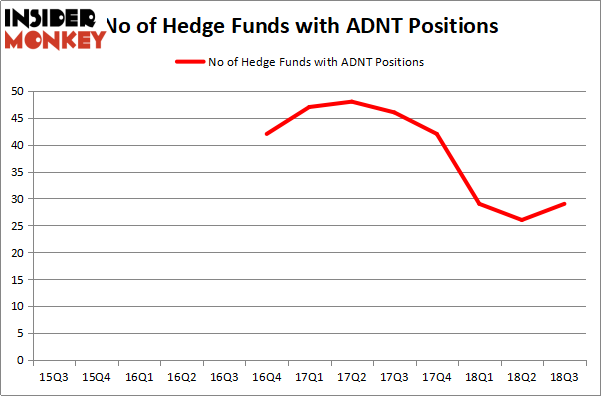 Among these funds, Blue Harbour Group held the most valuable stake in Adient plc (NYSE:ADNT), which was worth $257.5 million at the end of the third quarter. On the second spot was Lakewood Capital Management which amassed $113 million worth of shares. Moreover, Greenhaven Associates, Greenlight Capital, and 683 Capital Partners were also bullish on Adient plc (NYSE:ADNT), allocating a large percentage of their portfolios to this stock.

Now, key money managers have been driving this bullishness. Permian Investment Partners, managed by Alex Duran and Scott Hendrickson, initiated the most outsized position in Adient plc (NYSE:ADNT). Permian Investment Partners had $19.7 million invested in the company at the end of the quarter. Joel Greenblatt’s Gotham Asset Management also made a $15.6 million investment in the stock during the quarter. The other funds with new positions in the stock are Jim Simons’ Renaissance Technologies, Israel Englander’s Millennium Management, and D E Shaw.

As you can see these stocks had an average of 17 hedge funds with bullish positions and the average amount invested in these stocks was $203 million. That figure was $706 million in ADNT’s case. First Hawaiian, Inc. (NASDAQ:FHB) is the most popular stock in this table. On the other hand AmeriGas Partners, L.P. (NYSE:APU) is the least popular one with only 6 bullish hedge fund positions. Compared to these stocks Adient plc (NYSE:ADNT) is more popular among hedge funds. Considering that hedge funds are fond of this stock in relation to its market cap peers and it looks like a perfect contrarian, buy-low candidate, it may be a good idea to analyze it further and potentially include it in your portfolio.