Hedge fund interest in USG Corporation (NYSE:USG) shares was flat at the end of last quarter. This is usually a negative indicator. The level and the change in hedge fund popularity aren’t the only variables you need to analyze to decipher hedge funds’ perspectives. A stock may witness a boost in popularity but it may still be less popular than similarly priced stocks. That’s why at the end of this article we will examine companies such as Curtiss-Wright Corp. (NYSE:CW), Centennial Resource Development, Inc. (NASDAQ:CDEV), and Ollie’s Bargain Outlet Holdings Inc (NASDAQ:OLLI) to gather more data points.

To most shareholders, hedge funds are seen as worthless, outdated financial tools of years past. While there are greater than 8,000 funds trading at the moment, Our researchers hone in on the upper echelon of this group, about 700 funds. Most estimates calculate that this group of people watch over bulk of the hedge fund industry’s total asset base, and by watching their highest performing investments, Insider Monkey has found many investment strategies that have historically exceeded the broader indices. Insider Monkey’s flagship hedge fund strategy outperformed the S&P 500 index by 6 percentage points annually since its inception in May 2014 through early November 2018. We were able to generate large returns even by identifying short candidates. Our portfolio of short stocks lost 24% since February 2017 (through December 3rd) even though the market was up nearly 23% during the same period. We just shared a list of 11 short targets in our latest quarterly update.

What have hedge funds been doing with USG Corporation (NYSE:USG)? 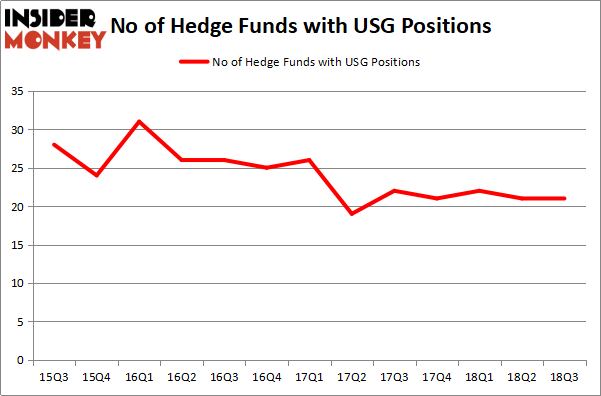 Among these funds, Berkshire Hathaway held the most valuable stake in USG Corporation (NYSE:USG), which was worth $1.69 billion at the end of the third quarter. On the second spot was Magnetar Capital which amassed $162.7 million worth of shares. Moreover, Alpine Associates, York Capital Management, and Water Island Capital were also bullish on USG Corporation (NYSE:USG), allocating a large percentage of their portfolios to this stock.

Due to the fact that USG Corporation (NYSE:USG) has witnessed falling interest from the smart money, logic holds that there was a specific group of fund managers who sold off their entire stakes last quarter. It’s worth mentioning that Ben Levine, Andrew Manuel and Stefan Renold’s LMR Partners said goodbye to the biggest position of the 700 funds followed by Insider Monkey, totaling about $15 million in stock. Phill Gross and Robert Atchinson’s fund, Adage Capital Management, also dropped its stock, about $6.8 million worth. These transactions are important to note, as total hedge fund interest stayed the same (this is a bearish signal in our experience).

As you can see these stocks had an average of 15.5 hedge funds with bullish positions and the average amount invested in these stocks was $235 million. That figure was $2.11 billion in USG’s case. Curtiss-Wright Corp. (NYSE:CW) is the most popular stock in this table. On the other hand CPFL Energia S.A. (NYSE:CPL) is the least popular one with only 2 bullish hedge fund positions. USG Corporation (NYSE:USG) is not the most popular stock in this group but hedge fund interest is still above average. This is a slightly positive signal but we’d rather spend our time researching stocks that hedge funds are piling on. In this regard CW might be a better candidate to consider a long position.