There are several ways to beat the market, and investing in small-cap stocks has historically been one of them. We like to improve the odds of beating the market further by examining what famous hedge fund operators such as Carl Icahn and George Soros think. Those hedge fund operators make billions of dollars each year by hiring the best and the brightest to do research on stocks, including small-cap stocks that big brokerage houses simply don’t cover. Because of Carl Icahn and other elite funds’ exemplary historical records, we pay attention to their small-cap picks. In this article, we use hedge fund filing data to analyze Rent-A-Center Inc (NASDAQ:RCII).

Rent-A-Center Inc shares haven’t seen a lot of action during the third quarter. Overall, hedge fund sentiment was unchanged. The stock was in 17 hedge funds’ portfolios at the end of the third quarter of 2018. At the end of this article, we will also compare RCII to other stocks including Nine Energy Service, Inc. (NYSE:NINE), OneSpan Inc. (NASDAQ:OSPN), and ConnectOne Bancorp Inc (NASDAQ:CNOB) to get a better sense of its popularity.

While collecting data for our write-up, we came across Miller Value Partners’ third-quarter 2018 letter to shareholders, that has an opinion on the company. The fund has a large position in Rent-A-Center and had this to say in the letter:

“The take-outs of Supervalu and Rent-A-Center (RCII), two of our largest holdings, and our successful investments in Fossil Group (FOSL), up over 200% in the first half of the year, have been some of significant positive contributors to this year’s overall performance. While these three holdings collectively represented 10% to 20% of the portfolios earlier in the year, they are now less than 1%. Similar to the past, we have redeployed the gains from successful investments into new value opportunities.”

Our readers will be interested to know that L. Steven Pepper, a director at the company, was responsible for the last major insider purchase of the company’s common stock, purchasing 45,000 shares at $10.93 in 2017. The shares are currently trading at $14.48 and hence the purchase was certainly a lucrative purchase.

What have hedge funds been doing with Rent-A-Center Inc (NASDAQ:RCII)? 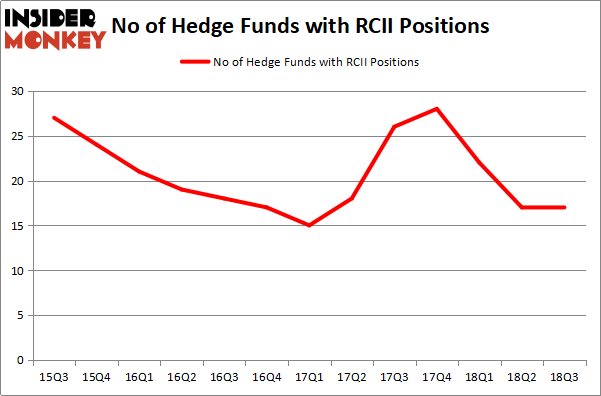 More specifically, Engaged Capital was the largest shareholder of Rent-A-Center Inc (NASDAQ:RCII), with a stake worth $65.2 million reported as of the end of September. Trailing Engaged Capital was Water Island Capital, which amassed a stake valued at $28.7 million. Marshall Wace LLP, GLG Partners, and Perella Weinberg Partners were also very fond of the stock, giving the stock large weights in their portfolios.

Judging by the fact that Rent-A-Center Inc (NASDAQ:RCII) has experienced falling interest from the entirety of the hedge funds we track, we can see that there was a specific group of funds that slashed their entire stakes last quarter. Interestingly, Jim Simons’s Renaissance Technologies dropped the biggest position of all the hedgies followed by Insider Monkey, valued at an estimated $7.5 million in stock, and Ben Levine, Andrew Manuel, and Stefan Renold’s LMR Partners was right behind this move, as the fund cut about $5 million worth. These transactions are intriguing, to say the least, as aggregate hedge fund interest stayed the same (this is a bearish signal in our experience).

As you can see these stocks had an average of 9 hedge funds with bullish positions and the average amount invested in these stocks was $44 million. That figure was $167 million in RCII’s case. ConnectOne Bancorp Inc (NASDAQ:CNOB) is the most popular stock in this table. On the other hand Tortoise MLP Fund, Inc. (NYSE:NTG) is the least popular one with only 2 bullish hedge fund positions. Compared to these stocks Rent-A-Center Inc (NASDAQ:RCII) is more popular among hedge funds. Considering that hedge funds are fond of this stock in relation to its market cap peers, it may be a good idea to analyze it in detail and potentially include it in your portfolio.