As we already know from media reports and hedge fund investor letters, many hedge funds lost money in October, blaming macroeconomic conditions and unpredictable events that hit several sectors, with healthcare among them. Nevertheless, most investors decided to stick to their bullish theses and their long-term focus allows us to profit from the recent declines. In particular, let’s take a look at what hedge funds think about Oppenheimer Holdings Inc. (NYSE:OPY) in this article.

Hedge fund interest in Oppenheimer Holdings Inc. (NYSE:OPY) shares was flat at the end of last quarter. This is usually a negative indicator. The level and the change in hedge fund popularity aren’t the only variables you need to analyze to decipher hedge funds’ perspectives. A stock may witness a boost in popularity but it may still be less popular than similarly priced stocks. That’s why at the end of this article we will examine companies such as Synergy Pharmaceuticals Inc (NASDAQ:SGYP), Nuveen Floating Rate Income Opportuntiy Fund (NYSE:JRO), and Verrica Pharmaceuticals Inc. (NASDAQ:VRCA) to gather more data points.

At Q3’s end, a total of 11 of the hedge funds tracked by Insider Monkey were long this stock, no change from the second quarter of 2018. By comparison, 8 hedge funds held shares or bullish call options in OPY heading into this year. With hedgies’ capital changing hands, there exists an “upper tier” of notable hedge fund managers who were upping their stakes meaningfully (or already accumulated large positions). 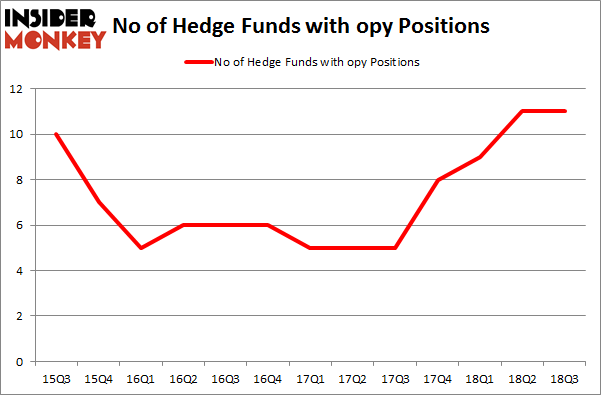 When looking at the institutional investors followed by Insider Monkey, Jim Simons’s Renaissance Technologies has the largest position in Oppenheimer Holdings Inc. (NYSE:OPY), worth close to $12.2 million, comprising less than 0.1%% of its total 13F portfolio. Coming in second is Noam Gottesman of GLG Partners, with a $8.1 million position; the fund has less than 0.1%% of its 13F portfolio invested in the stock. Remaining members of the smart money that hold long positions comprise Cliff Asness’s AQR Capital Management, Peter Rathjens, Bruce Clarke and John Campbell’s Arrowstreet Capital and D. E. Shaw’s D E Shaw.

Since Oppenheimer Holdings Inc. (NYSE:OPY) has witnessed a decline in interest from the smart money, logic holds that there were a few funds that slashed their positions entirely heading into Q3. At the top of the heap, Chuck Royce’s Royce & Associates sold off the biggest investment of the 700 funds followed by Insider Monkey, comprising close to $3 million in stock, and Matthew Hulsizer’s PEAK6 Capital Management was right behind this move, as the fund cut about $0.4 million worth. These transactions are interesting, as total hedge fund interest stayed the same (this is a bearish signal in our experience).

As you can see these stocks had an average of 7.75 hedge funds with bullish positions and the average amount invested in these stocks was $39 million. That figure was $35 million in OPY’s case. Synergy Pharmaceuticals Inc (NASDAQ:SGYP) is the most popular stock in this table. On the other hand Nuveen Floating Rate Income Opportuntiy Fund (NYSE:JRO) is the least popular one with only 6 bullish hedge fund positions. Compared to these stocks Oppenheimer Holdings Inc. (NYSE:OPY) is more popular among hedge funds. Considering that hedge funds are fond of this stock in relation to its market cap peers, it may be a good idea to analyze it in detail and potentially include it in your portfolio.