There are several ways to beat the market, and investing in small-cap stocks has historically been one of them. We like to improve the odds of beating the market further by examining what famous hedge fund operators such as Carl Icahn and George Soros think. Those hedge fund operators make billions of dollars each year by hiring the best and the brightest to do research on stocks, including small-cap stocks that big brokerage houses simply don’t cover. Because of Carl Icahn and other elite funds’ exemplary historical records, we pay attention to their small-cap picks. In this article, we use hedge fund filing data to analyze Merchants Bancorp (NASDAQ:MBIN).

Hedge fund interest in Merchants Bancorp shares was flat at the end of last quarter. This is usually a negative indicator. At the end of this article, we will also compare MBIN to other stocks including Xperi Corporation (NASDAQ:XPER), Schnitzer Steel Industries, Inc. (NASDAQ:SCHN), and RadNet Inc. (NASDAQ:RDNT) to get a better sense of its popularity.

Our readers will be interested to know that the last major insider purchase of the company’s common stock came at the hands of director D. Patrick O’Brien, who snapped up 3,000 shares at $22.99. The shares currently trade at $21.00, so the investment has not turned a profit as of yet.

Heading into the fourth quarter of 2018, a total of 8 of the hedge funds tracked by Insider Monkey held long positions in this stock, representing no change from one quarter earlier. Below, you can check out the change in hedge fund sentiment towards MBIN over the last 13 quarters. With hedge funds’ positions undergoing their usual ebb and flow, there exists a select group of noteworthy hedge fund managers who were adding to their stakes significantly (or already accumulated large positions). 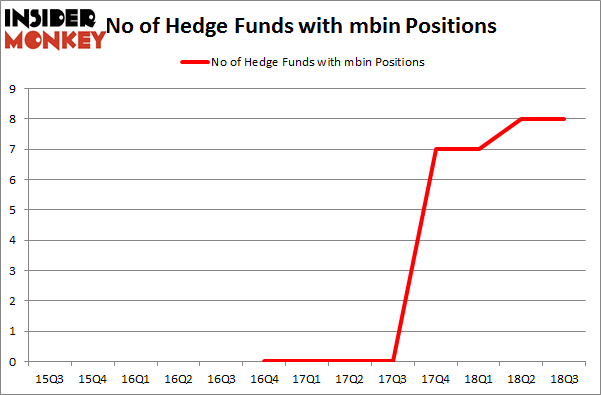 According to Insider Monkey’s hedge fund database, Paul Magidson, Jonathan Cohen. And Ostrom Enders’s Castine Capital Management has the number one position in Merchants Bancorp (NASDAQ:MBIN), worth close to $4.5 million, amounting to 1.3% of its total 13F portfolio. Sitting at the No. 2 spot is Matthew Lindenbaum of Basswood Capital, with a $4.5 million position; 0.2% of its 13F portfolio is allocated to the company. Other members of the smart money that hold long positions include D. E. Shaw’s D E Shaw, Israel Englander’s Millennium Management and John Overdeck and David Siegel’s Two Sigma Advisors.

Since Merchants Bancorp (NASDAQ:MBIN) has witnessed declining sentiment from the entirety of the hedge funds we track, it’s safe to say that there lies a certain “tier” of funds that slashed their positions entirely in the third quarter. Interestingly, Ken Griffin’s Citadel Investment Group cut the biggest position of the “upper crust” of funds tracked by Insider Monkey, totaling an estimated $0.8 million in call options. Matthew Hulsizer’s fund, PEAK6 Capital Management, also said goodbye to its call options, about $0.5 million worth. These bearish behaviors are interesting, as total hedge fund interest stayed the same (this is a bearish signal in our experience).

As you can see these stocks had an average of 13.5 hedge funds with bullish positions and the average amount invested in these stocks was $69 million. That figure was $13 million in MBIN’s case. Schnitzer Steel Industries, Inc. (NASDAQ:SCHN) is the most popular stock in this table. On the other hand Sierra Wireless, Inc. (NASDAQ:SWIR) is the least popular one with only 8 bullish hedge fund positions. Compared to these stocks Merchants Bancorp (NASDAQ:MBIN) is even less popular than SWIR. Considering that hedge funds aren’t fond of this stock in relation to other companies analyzed in this article, it may be a good idea to analyze it in detail and understand why the smart money isn’t behind this stock. This isn’t necessarily bad news. Although it is possible that hedge funds may think the stock is overpriced and view the stock as a short candidate, they may not be very familiar with the bullish thesis. In either case more research is warranted.