Looking for stocks with high upside potential? Just follow the big players within the hedge fund industry. Why should you do so? Let’s take a brief look at what statistics have to say about hedge funds’ stock picking abilities to illustrate. The Standard and Poor’s 500 Index returned approximately 5.7% in the 12 months ending October 26 (including dividend payments). Conversely, hedge funds’ 30 preferred S&P 500 stocks (as of June 2014) generated a return of 15.1% during the same 12-month period, with 53% of these stock picks outperforming the broader market benchmark. Coincidence? It might happen to be so, but it is unlikely. Our research covering the last 18 years indicates that hedge funds’ stock picks generate superior risk-adjusted returns. That’s why we believe it is wise to check hedge fund activity before you invest your time or your savings on a stock like Intrepid Potash, Inc. (NYSE:IPI).

Hedge fund interest in Intrepid Potash, Inc. (NYSE:IPI) shares was flat at the end of last quarter. This is usually a negative indicator. The level and the change in hedge fund popularity aren’t the only variables you need to analyze to decipher hedge funds’ perspectives. A stock may witness a boost in popularity but it may still be less popular than similarly priced stocks. That’s why at the end of this article we will examine companies such as Hingham Institution for Savings (NASDAQ:HIFS), Morgan Stanley China A Share Fund Inc. (NYSE:CAF), and Gilat Satellite Networks Ltd. (NASDAQ:GILT) to gather more data points.

How have hedgies been trading Intrepid Potash, Inc. (NYSE:IPI)? 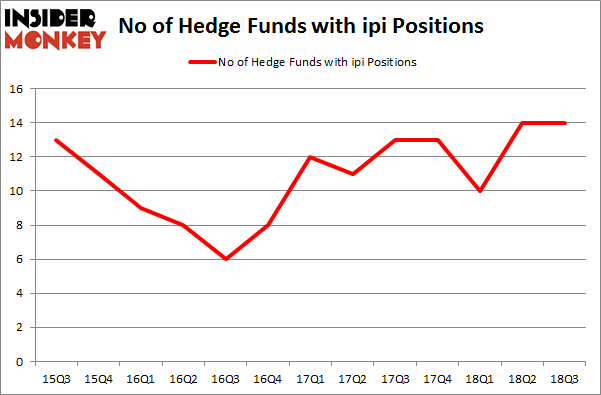 Judging by the fact that Intrepid Potash, Inc. (NYSE:IPI) has faced a decline in interest from the entirety of the hedge funds we track, logic holds that there is a sect of hedge funds that elected to cut their full holdings last quarter. At the top of the heap, Ken Grossman and Glen Schneider’s SG Capital Management dumped the biggest stake of the 700 funds followed by Insider Monkey, comprising an estimated $3.2 million in stock. John Overdeck and David Siegel’s fund, Two Sigma Advisors, also said goodbye to its stock, about $0.1 million worth. These moves are important to note, as total hedge fund interest stayed the same (this is a bearish signal in our experience).

As you can see these stocks had an average of 3 hedge funds with bullish positions and the average amount invested in these stocks was $16 million. That figure was $31 million in IPI’s case. OrthoPediatrics Corp. (NASDAQ:KIDS) is the most popular stock in this table. On the other hand Hingham Institution for Savings (NASDAQ:HIFS) is the least popular one with only 1 bullish hedge fund positions. Compared to these stocks Intrepid Potash, Inc. (NYSE:IPI) is more popular among hedge funds. Considering that hedge funds are fond of this stock in relation to its market cap peers, it may be a good idea to analyze it in detail and potentially include it in your portfolio.