Hedge fund interest in Heritage Insurance Holdings Inc (NYSE:HRTG) shares was flat at the end of last quarter. This is usually a negative indicator. At the end of this article, we will also compare HRTG to other stocks including Magenta Therapeutics, Inc. (NASDAQ:MGTA), Newtek Business Services, Inc (NASDAQ:NEWT), and ProShares Ultra Nasdaq Biotechnology (NASDAQ:BIB) to get a better sense of its popularity.

While collecting data for our article, we came across Incandescent Capital’s Quarterly Report, in which the hedge fund provided a detailed account regarding the company. Managing Member Eric Wu wrote the following in his letter addressed to the shareholders:

“The other insurer was Heritage Insurance Holdings (HRTG), a property catastrophe insurer based in Florida. Heritage suffered a general malaise for much of 2017, with shares, which started at $15.67, drifting down to $12 and below with no apparent catalyst. This is not uncommon, by the way, especially with small cap stocks which are easily moved by a medium-sized fund in excitement (or despair). In August, they announced a large acquisition of a private insurer in the New England, NBIC, which, perhaps since it required jamming a $125 million issue of convertible debt into the market, drove shares further down into the $11 range. And so, throughout the course of the year, I bought scoops of it here and there as it flip-flopped around, building it up to an 8-9% position by September.”

How have hedgies been trading Heritage Insurance Holdings Inc (NYSE:HRTG)?

Heading into the fourth quarter of 2018, a total of 8 of the hedge funds tracked by Insider Monkey held long positions in this stock, no change from one quarter earlier. Below, you can check out the change in hedge fund sentiment towards HRTG over the last 13 quarters. So, let’s examine which hedge funds were among the top holders of the stock and which hedge funds were making big moves. 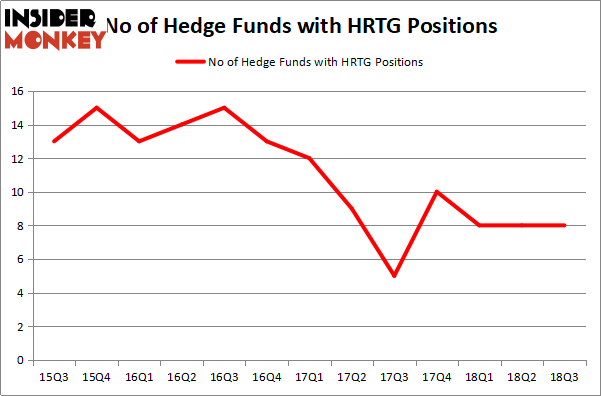 More specifically, Polar Capital was the largest shareholder of Heritage Insurance Holdings Inc (NYSE:HRTG), with a stake worth $19.3 million reported as of the end of September. Trailing Polar Capital was Royce & Associates, which amassed a stake valued at $13.2 million. Millennium Management, AQR Capital Management, and Renaissance Technologies were also very fond of the stock, giving the stock large weights in their portfolios.

Judging by the fact that Heritage Insurance Holdings Inc (NYSE:HRTG) has faced bearish sentiment from hedge fund managers, it’s safe to say that there exists a select few money managers that slashed their full holdings by the end of the third quarter. At the top of the heap, Noam Gottesman’s GLG Partners dumped the biggest stake of all the hedgies tracked by Insider Monkey, valued at close to $3.8 million in stock. Ron Bobman’s fund, Capital Returns Management, also sold off its stock, about $0.7 million worth. These moves are intriguing to say the least, as total hedge fund interest stayed the same (this is a bearish signal in our experience).

As you can see these stocks had an average of 5 hedge funds with bullish positions and the average amount invested in these stocks was $25 million. That figure was $38 million in HRTG’s case. Magenta Therapeutics, Inc. (NASDAQ:MGTA) is the most popular stock in this table. On the other hand ProShares Ultra Nasdaq Biotechnology (NASDAQ:BIB) is the least popular one with only 1 bullish hedge fund positions. Heritage Insurance Holdings Inc (NYSE:HRTG) is not the most popular stock in this group but hedge fund interest is still above average. This is a slightly positive signal but we’d rather spend our time researching stocks that hedge funds are piling on. In this regard MGTA might be a better candidate to consider a long position.