Hedge fund interest in Gaia, Inc. (NASDAQ:GAIA) shares was flat at the end of last quarter. This is usually a negative indicator. At the end of this article we will also compare GAIA to other stocks including Golden Star Resources Ltd. (USA) (NYSEAMEX:GSS), Natural Gas Services Group, Inc. (NYSE:NGS), and Seven Stars Cloud Group, Inc. (NASDAQ:SSC) to get a better sense of its popularity.

In the financial world there are dozens of signals shareholders have at their disposal to evaluate publicly traded companies. Some of the most under-the-radar signals are hedge fund and insider trading interest. Our experts have shown that, historically, those who follow the top picks of the best hedge fund managers can outclass their index-focused peers by a very impressive amount (see the details here).

While collecting more data about Gaia, Inc. (NASDAQ:GAIA) we stumbled upon Matt Sweeney’s year-end 2017 letter to shareholders of Laughing Water Capital, in which this hedge fund shares its views on the company. We bring you one part of the report:

“We first detailed GAIA in our year-end 2016 letter. At the time of our purchase, we believed we were buying a niche Video-On-Demand business for less than free due to the value of the company’s cash and real estate. Shares have rallied ~100% since then as the market realized what was happening beneath the surface. This rapid appreciation narrowed the gap between price and value, as well as pushed up the size of our position to a level where I felt it prudent to trim the position size. However, the company is executing very well against their long-term plan which they believe will bring them to EPS of $2.50 per share in 2021, and the sustainability of their model is becoming increasingly apparent, so we continue to hold a large – but smaller – position in GAIA.”

We’re going to take a look at the new hedge fund action surrounding Gaia, Inc. (NASDAQ:GAIA). Its important to note, the company wasn’t one of the 30 most popular stocks among hedge funds in Q3 of 2018.

At the end of the third quarter, a total of 9 of the hedge funds tracked by Insider Monkey were long this stock, a change of 0% from the second quarter of 2018. On the other hand, there were a total of 5 hedge funds with a bullish position in GAIA at the beginning of this year. With the smart money’s sentiment swirling, there exists a select group of notable hedge fund managers who were increasing their holdings substantially (or already accumulated large positions). 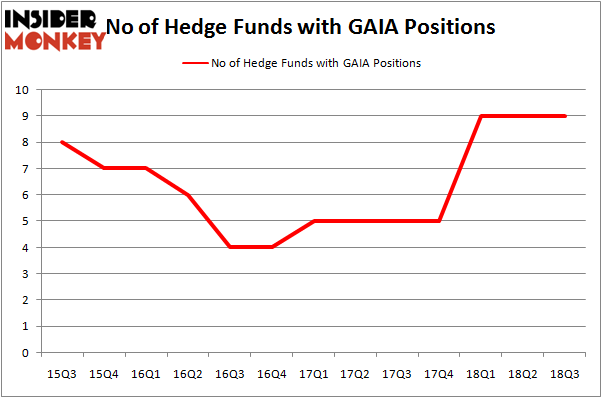 The largest stake in Gaia, Inc. (NASDAQ:GAIA) was held by Royce & Associates, which reported holding $8.7 million worth of stock at the end of September. It was followed by Nantahala Capital Management with a $6.4 million position. Other investors bullish on the company included Renaissance Technologies, P.A.W. CAPITAL PARTNERS, and Lyon Street Capital.

We view hedge fund activity in the stock unfavorable, but in this case there was only a single hedge fund selling its entire position: PEAK6 Capital Management. One hedge fund selling its entire position doesn’t always imply a bearish intent. Theoretically a hedge fund may decide to sell a promising position in order to invest the proceeds in a more promising idea. However, we don’t think this is the case in this case because only one of the 800+ hedge funds tracked by Insider Monkey identified as a viable investment and initiated a position in the stock (that fund was Harvest Capital Strategies).

As you can see these stocks had an average of 6.75 hedge funds with bullish positions and the average amount invested in these stocks was $21 million. That figure was $29 million in GAIA’s case. CECO Environmental Corp. (NASDAQ:CECE) is the most popular stock in this table. On the other hand Seven Stars Cloud Group, Inc. (NASDAQ:SSC) is the least popular one with only 2 bullish hedge fund positions. Gaia, Inc. (NASDAQ:GAIA) is not the most popular stock in this group but hedge fund interest is still above average. This is a slightly positive signal but we’d rather spend our time researching stocks that hedge funds are piling on. In this regard CECE might be a better candidate to consider a long position.

Here is Why You Should Buy Alphabet Inc (GOOGL) Now
Monthly Newsletter Strategy
Download a free copy of our newsletter and see the details inside!
Hedge Fund Resource Center
Related News
Another Investor Talks About Shorting “Cult” Stock Tesla (TSLA), Plus Talks Longs and Shorts in Dell, Gaia, and Land’s End Gaia Inc (GAIA): Ariel Investments Decreases Its Stake Michael Zimmerman’s Prentice Capital Is Betting on These Stocks Should You Sell ValueVision Media, Inc. (VVTV)? ValueVision Media, Inc. (VVTV): Hedge Funds and Insiders Are Bullish, What Should You Do? 5 Most Socially Responsible Companies in America 5 Ways You Can Eliminate Credit Card Debt 10 Easiest Road Test Sites in NY and NJ
Billionaire Hedge Funds