While the market driven by short-term sentiment influenced by uncertainty regarding the future of the interest rate environment in the US, declining oil prices and the trade war with China, many smart money investors are keeping their optimism regarding the current bull run, while still hedging many of their long positions. However, as we know, big investors usually buy stocks with strong fundamentals, which is why we believe we can profit from imitating them. In this article, we are going to take a look at the smart money sentiment surrounding Boston Beer Co Inc (NYSE:SAM).

Boston Beer Co Inc (NYSE:SAM) shares haven’t seen a lot of action during the third quarter. Overall, hedge fund sentiment was unchanged. The stock was in 14 hedge funds’ portfolios at the end of the third quarter of 2018. This wasn’t enough for the company to be considered as on of the 30 most popular stocks among ALL hedge funds.

The level and the change in hedge fund popularity aren’t the only variables you need to analyze to decipher hedge funds’ perspectives. A stock may witness a boost in popularity but it may still be less popular than similarly priced stocks. That’s why at the end of this article we will examine companies such as Kinross Gold Corporation (USA) (NYSE:KGC), MorphoSys AG (NASDAQ:MOR), and Apergy Corporation (NYSE:APY) to gather more data points.

In the financial world, there are a large number of tools investors have at their disposal to grade stocks. A pair of the most under-the-radar tools are hedge fund and insider trading indicators. We have shown that, historically, those who follow the top picks of the best fund managers can outperform the broader indices by a solid amount. Insider Monkey’s flagship best performing hedge funds strategy returned 17.4% year to date and outperformed the market by more than 14 percentage points this year. This strategy also outperformed the market by 3 percentage points in the fourth quarter despite the market volatility (see the details here). That’s why we believe hedge fund sentiment is a useful indicator that investors should pay attention to.

The Boston Beer Company secured twelve-month earnings of $101 million, a 12% increase over the year-ago period.

Also, this one-year growth rate exceeded its 5-year annual growth average of 4.8%, mirroring the company’s growth rate. Boston Beer Company has intelligently deployed its equity funds, leading to a 23% return on equity, above the sensible minimum of 20%. Moreover, its return on assets of 16% exceeds the US Beverage industry of 7.3%, signifying Boston Beer Company utilized its assets proficiently. However, its return on capital deteriorated over the past three years from 29% to 21%.

President and CEO Dave Burwick was responsible for the last insider purchase of Boston Beer stock, acquiring 255 shares at $196.38 in 2016. With the shares trading at $282.24, it was certainly a profitable trade.

What does the smart money think about Boston Beer Co Inc (NYSE:SAM)?

Heading into the fourth quarter of 2018, a total of 14 of the hedge funds tracked by Insider Monkey were bullish on this stock, a change of 0% from the previous quarter. On the other hand, there were a total of 20 hedge funds with a bullish position in SAM at the beginning of this year. With hedge funds’ capital changing hands, there exists a few noteworthy hedge fund managers who were adding to their stakes substantially (or already accumulated large positions). 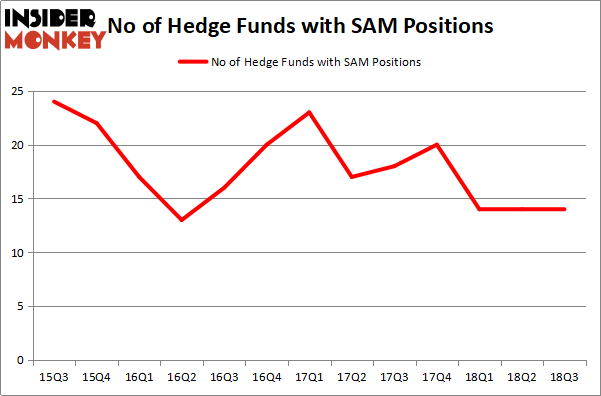 Among these funds, Fisher Asset Management held the most valuable stake in Boston Beer Co Inc (NYSE:SAM), which was worth $89.1 million at the end of the third quarter. On the second spot was AQR Capital Management which amassed $78.4 million worth of shares. Moreover, Two Sigma Advisors, GLG Partners, and Citadel Investment Group were also bullish on Boston Beer Co Inc (NYSE:SAM), allocating a large percentage of their portfolios to this stock.

Judging by the fact that Boston Beer Co Inc (NYSE:SAM) has faced bearish sentiment from hedge fund managers, it’s safe to say that there is a sect of funds who were dropping their full holdings by the end of the third quarter. Interestingly, Andrew Sandler’s Sandler Capital Management dropped the largest stake of the “upper crust” of funds watched by Insider Monkey, comprising about $13.5 million in stock. David Costen Haley’s fund, HBK Investments, also dropped its stock, about $0.5 million worth. These moves are interesting, as total hedge fund interest stayed the same (this is a bearish signal in our experience).

As you can see these stocks had an average of 14 hedge funds with bullish positions and the average amount invested in these stocks was $142 million. That figure was $264 million in SAM’s case. Apergy Corporation (NYSE:APY) is the most popular stock in this table. On the other hand MorphoSys AG (NASDAQ:MOR) is the least popular one with only 5 bullish hedge fund positions. Boston Beer Co Inc (NYSE:SAM) is not the least popular stock in this group but hedge fund interest is still below average. This is a slightly negative signal and we’d rather spend our time researching stocks that hedge funds are piling on. In this regard APY might be a better candidate to consider a long position.