“Market conditions are changing. The continued rise in interest rates suggests we are in the early stages of a bond bear market, which could intensify as central banks withdraw liquidity. The receding tide of liquidity will start to reveal more rocks beyond what has been exposed in emerging markets so far, and the value of a value discipline will be in avoiding the biggest capital-destroying rocks. If a rock emerges on the crowded shore of U.S. momentum, it could result in a major liquidity challenge, as momentum is often most intense on the downside as a crowded trade reverses. So investors are facing a large potential trade-off right now: continue to bet on the current dominance of momentum and the S&P 500, or bet on change and take an active value bet in names with attractive value and optionality, but with negative momentum,” said Clearbridge Investments in its market commentary. We aren’t sure whether long-term interest rates will top 5% and value stocks outperform growth, but we follow hedge fund investor letters to understand where the markets and stocks might be going. This article will lay out and discuss the hedge fund and institutional investor sentiment towards AAON, Inc. (NASDAQ:AAON).

AAON, Inc. (NASDAQ:AAON) shares haven’t seen a lot of action during the third quarter. Overall, hedge fund sentiment was unchanged. The stock was in 5 hedge funds’ portfolios at the end of the third quarter of 2018. The level and the change in hedge fund popularity aren’t the only variables you need to analyze to decipher hedge funds’ perspectives. A stock may witness a boost in popularity but it may still be less popular than similarly priced stocks. That’s why at the end of this article we will examine companies such as Extraction Oil & Gas, Inc. (NASDAQ:XOG), First Bancorp (NYSE:FBP), and Lithia Motors Inc (NYSE:LAD) to gather more data points.

Heading into the fourth quarter of 2018, a total of 5 of the hedge funds tracked by Insider Monkey held long positions in this stock, no change from the previous quarter. Below, you can check out the change in hedge fund sentiment towards AAON over the last 13 quarters. So, let’s review which hedge funds were among the top holders of the stock and which hedge funds were making big moves. 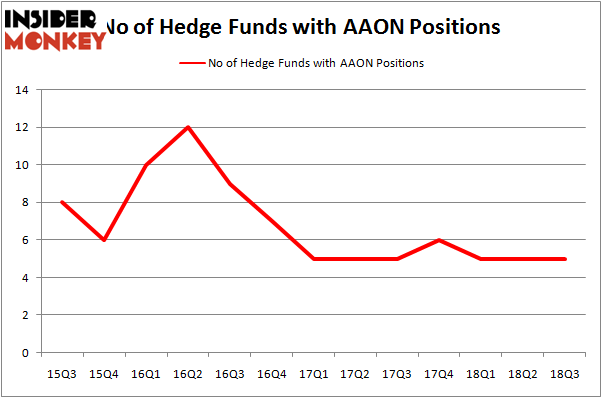 More specifically, Citadel Investment Group was the largest shareholder of AAON, Inc. (NASDAQ:AAON), with a stake worth $5.7 million reported as of the end of September. Trailing Citadel Investment Group was Zebra Capital Management, which amassed a stake valued at $0.6 million. AQR Capital Management, Holocene Advisors, and D E Shaw were also very fond of the stock, giving the stock large weights in their portfolios.

Because AAON, Inc. (NASDAQ:AAON) has witnessed falling interest from the smart money, logic holds that there was a specific group of funds that decided to sell off their full holdings last quarter. It’s worth mentioning that Ken Grossman and Glen Schneider’s SG Capital Management sold off the largest stake of the “upper crust” of funds monitored by Insider Monkey, valued at an estimated $1 million in stock. Matthew Hulsizer’s fund, PEAK6 Capital Management, also said goodbye to its stock, about $0.1 million worth. These bearish behaviors are important to note, as total hedge fund interest stayed the same (this is a bearish signal in our experience).

As you can see these stocks had an average of 19.5 hedge funds with bullish positions and the average amount invested in these stocks was $320 million. That figure was $7 million in AAON’s case. Pinnacle Entertainment, Inc (NYSE:PNK) is the most popular stock in this table. On the other hand First Bancorp (NYSE:FBP) is the least popular one with only 18 bullish hedge fund positions. Compared to these stocks AAON, Inc. (NASDAQ:AAON) is even less popular than FBP. Considering that hedge funds aren’t fond of this stock in relation to other companies analyzed in this article, it may be a good idea to analyze it in detail and understand why the smart money isn’t behind this stock. This isn’t necessarily bad news. Although it is possible that hedge funds may think the stock is overpriced and view the stock as a short candidate, they may not be very familiar with the bullish thesis. In either case more research is warranted.