Will Carl Icahn pick a fight with Apple? (MarketWatch)
Apple Inc. (NASDAQ:AAPL) Chief Executive Tim Cook probably used his deliberate, quiet charm to try to persuade activist investor Carl Icahn to change his mind. When the two met in New York on Monday, as was widely reported, Icahn wanted to get the notion on the table that investors want more returns from Apple AAPL +0.31% and its still-growing cash pile than they are getting. In April, Apple pledged to return $100 billion to investors by the end of 2015, increasing both its dividend and its share repurchase program. It now pays a $3.05 dividend per share. 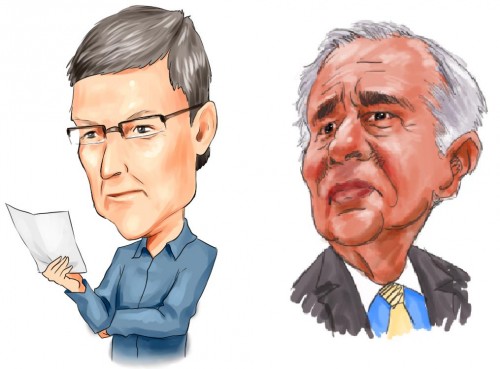 One Of The Top Hedge Fund Holders Of J.C. Penney Stock Dumped Its Stake (BusinessInsider)
In a regulatory filing hedge fund Perry Capital, once the third largest holder of J.C. Penney Company, Inc. (NYSE:JCP) stock, revealed that it dumped about half its stake in the company. The fund, with about $4.8 billion assets under management, cut its stake from 8.62% of the company down to 3.28%, according to the filing. Perry had been one of the top three hedge fund holders of J.C. Penney stock along with Soros Management and Glevniew Capital.

Sussman named to Hedge Fund Hall of Fame (KJOnline)
The key to managing a successful hedge fund is simple in theory: Produce a healthy return for investors. Getting there, though, is massively complex; otherwise, everyone would excel. S. Donald Sussman, a longtime hedge fund investor through his Greenwich-Conn.-based firm Paloma Partners, has distinguished himself as an elite investor not just for being successful. He also was one of the early pioneers of the industry “seeding model,” said Amanda Cantrell, managing editor of Institutional Investor’s Alpha, a trade publication that covers the global hedge fund industry. Essentially, Cantrell said, he recognized the value of investing in people and their ideas.

Gibraltar Seen as Europe-Beater for Finance Professionals: Taxes (BusinessWeek)
Gibraltar, the 300-year-old U.K. territory near the southern tip of Spain, is attracting hedge funds by offering low tax rates and regulation that enables managers to market investments across the European Union. The number of funds in Gibraltar more than quadrupled to at least 200 in 2012 from four years earlier, according to the Financial Services Commission, which supervises the industry. Many of them are run by traders who previously worked in London and Zurich at investment banks such as BNP Paribas SA (EPA:BNP), UBS AG (ADR) (NYSE:UBS) and Goldman Sachs Group, Inc. (NYSE:GS).

Peak6 reopens to Australian investors (FinancialStandard)
Investment from Australian institutions has helped US hedge fund manager Peak6 achieve one of the fastest growing launches in recent times. The group’s Achievement fund launched in September 2012 and has already grown to US$1.55 billion in funds under management. The rapid growth comes in spite of a three month period where it closed to new investors, a precautionary method managers use to prevent overheating.

Microsoft Surface 2.0: Another Lost Cause?

A Smart Way to Look at Anti-Terrorism

1 Giant Risk Facing Anyone Who Owns These Agricultural Giants