Hedge Fund Manager Pissed At Luby’s, Inc. (LUB), Nominates His Father To The Board

Activist hedge fund Bandera Partners filed a 13D regarding Luby’s, Inc. (NYSE:LUB). Other hedge funds are reducing their bets on the stock. The number of long hedge fund positions retreated by 1 during the third quarter. Does it make sense to follow Bandera Partners into LUB?

According to most investors, hedge funds are seen as unimportant, outdated investment vehicles of the past. While there are more than 8000 funds with their doors open at the moment, We choose to focus on the aristocrats of this group, about 700 funds. Most estimates calculate that this group of people handle most of the hedge fund industry’s total asset base, and by observing their top stock picks, Insider Monkey has determined various investment strategies that have historically outrun the broader indices. Insider Monkey’s flagship hedge fund strategy outrun the S&P 500 index by 6 percentage points per annum since its inception in May 2014 through early November 2018. We were able to generate large returns even by identifying short candidates. Our portfolio of short stocks lost 26.1% since February 2017 even though the market was up nearly 19% during the same period. We just shared a list of 11 short targets in our latest quarterly update.

What have hedge funds been doing with Luby’s, Inc. (NYSE:LUB)? 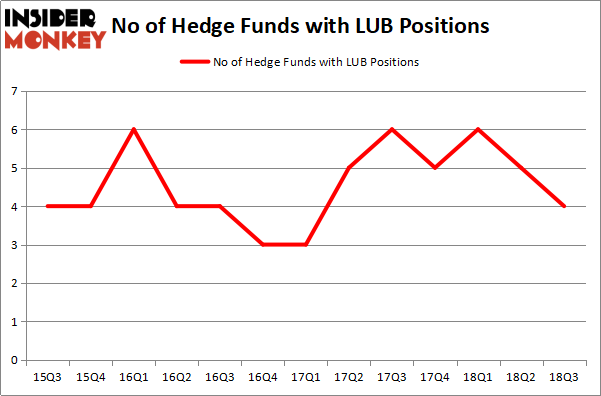 The largest stake in Luby’s, Inc. (NYSE:LUB) was held by Bandera Partners, which reported holding $2.6 million worth of stock at the end of September. It was followed by Harvest Capital Strategies with a $0.6 million position. Other investors bullish on the company included Renaissance Technologies and Millennium Management.

We view hedge fund activity in the stock unfavorable, but in this case there was only a single hedge fund selling its entire position: Ancora Advisors. One hedge fund selling its entire position doesn’t always imply a bearish intent. Theoretically a hedge fund may decide to sell a promising position in order to invest the proceeds in a more promising idea. However, we don’t think this is the case in this case because none of the 700+ hedge funds tracked by Insider Monkey identified LUB as a viable investment and initiated a position in the stock.

Luby’s, Inc. (LUB) has been a true value destroying investment for the last 5 years as the stock lost nearly 80% of its value. Bandera’s Jeff Gramm’s letter to the company’s board explains what’s going on:

“Bandera Partners owns 2,619,721 shares of Luby’s, Inc. (“Luby’s” or the “Company”) common stock (“Common Stock”) or approximately 8.9% of the Company’s outstanding shares.  We have owned Common Stock continuously for more than a decade, and have supported management and the Board of Directors for that entire time. Bandera is precisely the type of long-term shareholder that a well-managed company should want to have. I also have personal and business relationships with members of the Pappas family that run deep, and I view Christopher and Harris Pappas as pillars of their community and honest businesspeople.

At the same time, I have a fiduciary responsibility to the investors in my fund, and I’m writing today to tell you that what’s happening at Luby’s is simply not working. The Fuddruckers and Luby’s restaurant concepts do not generate a sufficient return on capital to justify the investments management is making, under your direction and supervision, into the business. The strategy of plowing cash flows back into restaurants works with good concepts like Pappadeaux and Pappasito’s, but it has been a failure at Luby’s. Capital expenditures since fiscal 2008 have totaled $235 million dollars, about six times the company’s current market capitalization. The return on this investment has been dismal, and to pay down the debt you have accumulated in the process, Luby’s is liquidating the most valuable asset shareholders own, the company’s real estate.
Luby’s owned real estate portfolio is tremendously valuable. Its appraised value (net of debt) is over $4.00 per share of Common Stock, as compared to its current stock price around $1.40.1 It is brutally painful to watch the Company chisel away at its real estate portfolio to fund low-return investments into the business. Since fiscal 2008, Luby’s has sold $88 million of assets. This capital, more than double the current market capitalization, is gone and forever lost to shareholders. Given the futility of recent investments into Luby’s and Fuddruckers, has the Board considered a capital allocation strategy that preserves the real estate value and returns capital to the owners of the company, the shareholders?
I appreciate that CEO Christopher Pappas reduced his salary to $1, but I also believe the decision to replace the Chief Operating Officer, yet maintain him in a lesser role for $350,000 per year, shocked shareholders and could have contributed to the large sell-off of the Common Stock in late October. Shareholders already value Luby’s at a huge discount to its liquidation value, probably because they expect the company’s book value will continue to deteriorate. Recent events confirm the fears of many shareholders that Luby’s is not serious about addressing its bloated corporate expenses. Does the Board have a detailed plan to align Luby’s overhead costs with the reality of running a $40 million dollar company?
I have tried to reach a mutually agreeable settlement with the company that would give Bandera sufficient seats on the company’s Board to help foster positive change. Luby’s has hired a very sophisticated and expensive corporate defense lawyer instead of engaging in substantive negotiations to improve the Board with fresh, independent faces. To date, almost four weeks after I responsibly engaged with the company, Luby’s has evaded substantive discussion. CEO Christopher Pappas has not responded to any of my requests to speak, and only one of the Board members I have reached out to has replied. Instead of agreeing to talk with a supportive but frustrated shareholder, the director wrote, “I have forwarded your request to corporate.” In my opinion, these are not the actions of a Board of Directors concerned with the interests of the shareholders it is supposed to represent.
I tried to settle this matter amicably, and for the good of all shareholders, but you left me no choice but to nominate a slate of highly qualified directors with deep experience in finance, real estate and restaurant operations. You could have embraced them and offered to add at least some of them to the Board, instead of snubbing us, rejecting serious discussion, and forcing us to bring real choice directly to the shareholders [emphasis added]. Besides myself, our slate includes:
Senator Phil Gramm
Sen. Gramm was an economics professor at Texas A&M before serving 24 years in the United States Congress. His legislative record includes several famous initiatives to reduce Federal spending including the Gramm-Latta Budget and the Gramm-Rudman Act. Since leaving public service, Sen. Gramm was Vice Chairman of UBS Investment Bank before becoming Vice Chairman of Lone Star Global Acquisitions, a real-estate oriented private equity firm.
Stacy Hock
Ms. Hock is a highly-accomplished philanthropist, public policy activist, and business owner. She is a Texas gubernatorial appointee as Vice Chair of the Texas Commission on Next Generation Assessment and Accountability. She serves on Lt. Governor Patrick’s Education Advisory Council, and is Chairman of the Board of Texans for Education Opportunity. Ms. Hock serves on various other public policy, museum and business boards, and previously held management positions in the software industry, including at IBM. She has a degree in Computer Science and Electrical Engineering from MIT, and an MBA from the University of Texas.
Savneet Singh
Mr. Singh is a very well-respected entrepreneur who has launched various finance, software and real estate businesses. He is a Partner at Coventure, an asset manager with funds in lending, venture capital and real estate. Mr. Singh was named to the prestigious Forbes 30 under 30 list, Crains 40 under 40, and the Empact 100 list of top 100 entrepreneurs under 30. Among his directorships, he serves on the board of Par Technology, a $250 million public company that sells POS systems to restaurants and retailers.
Brian Wright
Mr. Wright was introduced to me by a private equity investor who called him, “The best multi-unit operator I’ve ever worked with.” He is currently CEO of Bertucci’s Restaurants, where he has grown EBITDA and turned same-store sales positive. Mr. Wright led a massive restructuring at Bertucci’s, closing multiple unprofitable locations, shedding bad leases through a beneficial pre-packaged bankruptcy, and facilitating a sale to new owners. He was previously COO of Au Bon Pain, President of Chevy’s, COO of Phoenix Children’s Academy, and SVP of Operations at Einstein Noah’s Restaurant Group.

I understand that Luby’s directors control approximately 38% of the outstanding shares of Common Stock. But I believe this is the outside shareholders’ last chance to salvage their investment in the company, and I feel a responsibility to take on this difficult battle on their behalf, rather than subject myself and other Luby’s shareholders to another year of value destruction. If any of you would like to speak with me about Bandera’s slate of Board nominees or any other matters, you can reach me at 212-232-4583.”

By the way, Senator Phill Gramm is Jeff Gramm’s father.

Anyway, we believe there is a decent chance that Bandera could be successful in its attempt to taking the control of the company. That’s what the market thinks as the stock appreciated 20% just this week. This isn’t a very liquid stock, so we won’t make any recommendations to our premium members regarding this stock. However, here is how I see it:

Bandera has about $2.5 million in this stock. Proxy fights are very costly (usually it costs at least $1 million). Assuming that Bandera prevails, the stock could climb to $3-$4. So, Bandera Partners will make at most $4 million in stock gains. Jeff Gramm and his partner will keep 20% of this as performance fees. Considering that Jeff Gramm can receive at most $800K by spending at least $1 million, it doesn’t make sense for him to pursue a time consuming campaign unless he is really really pissed at Christopher Pappas.  By buying LUB today you are betting on a positive outcome. If that happens, the company will probably be liquidated and you will receive about $3 per share. If the outcome was negative, the stock can easily go below, $1.