Insider Monkey tracks hedge funds’ moves to identify the best stocks to buy and short. We recommend about 10-15 long positions and 5-10 short positions in our quarterly newsletter every quarter. Our long strategy was launched 5.5 years ago and its stock picks outperformed the Russell 2000 ETFs by 40 percentage points. Our short strategy was launched almost 3 years ago and its picks lost close to 28% since then. Considering that S&P 500 Index returned close to 39% during the same period, the performance of our short picks is truly mind blowing (see the details here). A large majority of hedge funds that we are following couldn’t outperform these returns. In this article I will tell you the story of how we accomplished this feat by giving a real life example of a battleground stock.

Intelsat S.A. (NYSE:I) attracted our attention in the summer of 2018 as hedge fund sentiment started to creep up. By the end of September 2018 Intelsat was one of the most popular small-cap stocks among hedge funds. Whenever this happens we pay really close attention. It could mean two things. First, we might recommend a long position in the stock. Second, we might make Intelsat S.A. (NYSE:I) one of our rare short recommendations if our proprietary quantitative strategy determines the stock overcrowded with a significant risk of collapse. In the past hedge fund battleground stocks like SunEdison, which was championed by billionaire David Einhorn, went bankrupt; Community Health Systems, Inc. (NYSE:CYH), which was championed by billionaire Larry Robbins,  lost 95% of its value. Some of the other highly contested popular hedge fund stocks like Netflix Inc (NASDAQ:NFLX), Amazon.com Inc. (NASDAQ:AMZN), and Microsoft Corp (NASDAQ:MSFT) went on to become the best performing stocks in the last 10 years. So, we learned from these highly publicized hedge fund failures and successes, and developed our flagship short strategy.

A year ago I was planning to interview Kerrisdale Capital’s Sahm Adrangi. Kerrisdale allocated more than 20% of its 13F portfolio to Intelsat shares, making it its second largest position. Adrangi was also publicly talking about this investment. Right before we set a date for the interview, our quantitative strategy determined that Intelsat is a battleground stock that carries a significant risk of underperforming the market and we recommended a short position in the stock in the November 2018 issue of our quarterly premium newsletter. We emailed our stock picks before 1 pm on November 15th, and Intelsat closed at $25.26 that day (we give our subscribers at least a few hours to trade before we start tracking the performance of our stock picks).

I decided to postpone my interview with Sahm Adrangi until we find out who is right about Intelsat. In the following months Intelsat’s popularity among hedge funds climbed and it became our #1 short recommendation.

Heading into the fourth quarter of 2019, a total of 48 of the hedge funds tracked by Insider Monkey were long this stock, a change of 14% from the previous quarter. Below, you can check out the change in hedge fund sentiment towards Intelsat over the last 17 quarters. You will see that hedge fund sentiment towards Intelsat took off in the second quarter of 2018 and peaked at the end of March. 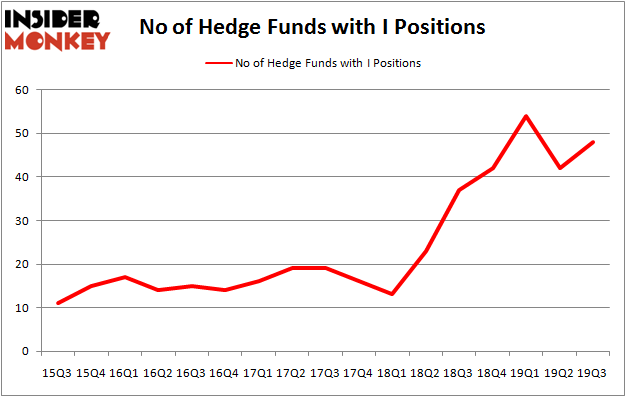 Intelsat shares underperformed the market since our recommendation but was showing signs of life as early as October. Intelsat shareholders were hoping to collect billions of dollars from the sale of its satellite frequency spectrum. Unfortunately federal government intervened and it now seems like a public auction will be held and most of the proceeds will be going to the government rather than Intelsat shareholders. Naturally Intelsat shares crashed in November, plunging from $26 to $6.35 yesterday.

Successful short bets like Intelsat is the reason why our short recommendations lost a cumulative of nearly -28% since February 2017 and outperformed the S&P 500 ETF (SPY) shorts (this is what some hedge funds use to “hedge” their beta exposure) by 67 percentage points. Most individual investors aren’t interested in shorting but even bullish investors can benefit from shorting. Instead of going 100% long, they can have the same net exposure by going 130% long and 30% short. Our investors choosing this path were able to enhance their returns by 20 percentage points cumulatively since February 2017. If you aren’t interested in a premium newsletter subscription, you should check out hedge funds’ consensus picks. Our calculations showed that top 20 most popular stocks among hedge funds returned 34.7% in 2019 through November 22nd and outperformed the S&P 500 ETF (SPY) by 8.5 percentage points.

Daily NewsletterHeadlineIs I A Good Investment Right Now?Is I A Good Stock To Buy?NewsfeedNYSE:IYahoo Finance