India is the second most populated country in the world and according to Citigroup, its GDP is expected to grow around 5.7%-6.2% in FY14. For a new normal, that is still impressive! Although, the country’s reputation had been tarnished and India was lately in the news for wrong reasons — widespread corruption and weak government policies — it is still attracting a lot of attention lately. Why?

Due to continued high inflation, the Reserve Bank of India (RBI) had kept the interest rates pretty high, which eventually hampered its growth. This, coupled with poor policy-making by the government, led to the depreciation of its currency by almost 30% in just 6 months.

But now, both the Indian government and the RBI believe that it is high time, and crucial policy changes are necessary. RBI has been cutting the interest rates, and recently cut the Cash Reserve Ratio (CRR) and Repo rate by 25bps each. The Indian government also raised the FDI limit in retail to 49%, in addition to many policy decisions recently.

Moreover, its inflation is at its 38-month low, and we can safely expect more interest rate cuts. This extra liquidity with Indian banks would trickle down in the economy, in the form of commercial and retail loans, which would eventually fatten the net interest income of Indian banks like HDFC Bank Limited (ADR) (NYSE:HDB) and ICICI Bank Limited (ADR) (NYSE:IBN), which have been consistently reporting stellar numbers. 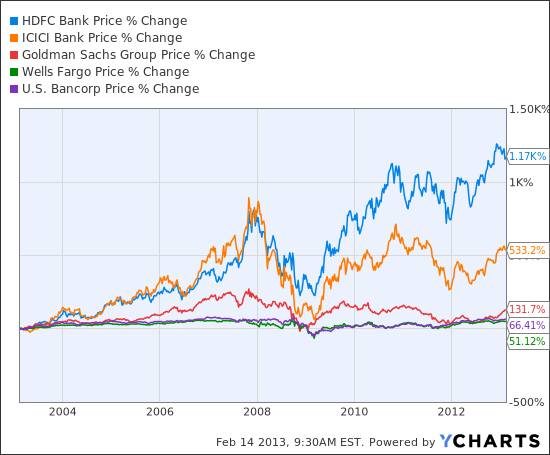 Although, both HDFC Bank and ICICI Bank are relatively small, it is their smaller size that allows them to grow at a rapid pace. Let’s compare the metrics of HDFC and ICICI along with biggies like Goldman Sachs Group, Inc. (NYSE:GS), Wells Fargo & Company (NYSE:WFC) and U.S. Bancorp (NYSE:USB).

From the table, it’s not hard to conclude that HDFC Bank is clearly the pick. Not only does it enjoy the highest net margins, but it also sports the lowest debt/equity ratio, even less than the conservative Wells Fargo. Additionally HDFC Bank enjoys the highest ROE in the industry, and analysts estimate its EPS to expand by 30% for the next 5 years. This means in 5 years a $1,000 would turn into $3,712.

However ICICI Bank loses its luster due to high debt/equity ratio and mediocre net margins. Moreover, it has the least returns on equity, and its shares appear to be overvalued.